After a few years of absence, an indoor event in Paris moved to Bercy in 1986, becoming one of the most prestigious tournaments in the ATP calendar, with Boris Becker as the first champion. Stefan Edberg, Goran Ivanisevic, Andre Agassi, Pete Sampras, Marat Safin, Novak Djokovic, Roger Federer and Andy Murray have all won the title here, with memorable finals that played a key role in the year-end rankings.

The 2020 edition takes place next week, and it's the third and last Masters 1000 event of the crippled season, gathering strong but not the most outstanding field. Novak Djokovic will not defend the title he won a year ago, skipping Paris together with world no.

3 Dominic Thiem, who had blisters problems against Andrey Rublev in Vienna. The 20-time Rafael Nadal is the top seed, seeking the first title in Paris, one of the rare ones he is missing in his rich collection. Nadal will face a tricky second-round opponent in a former finalist Filip Krajinovic or the fellow Spaniard Feliciano Lopez before a possible third-round encounter against Borna Coric.

David Goffin and Pablo Carreno Busta are also in Nadal's quarter, battling in the third round before the meeting against the Roland Garros champion. The 4th seed Alexander Zverev is among the favorites, winning back-to-back titles in Cologne and seeking the fourth Masters 1000 title, the first since Madrid 2018.

Alexander will face Miomir Kecmanovic or John Millman in the second round, with Yoshihito Nishioka, Pablo Andujar, Adrian Mannarino or Dusan Lajovic waiting in the third. The German should reach the quarters, and that's where it becomes more serious, with the 5th seed Andrey Rublev looking for another deep run after being the most consistent player since the season restart.

Rafael Nadal seeks the first title in Paris as the top seed.

Diego Schwartzman and the struggling Russian Daniil Medvedev lead the third quarter, with the 2018 winner Karen Khachanov and Alex de Minaur as their most formidable rivals.

Matteo Berrettini, Milos Raonic, Felix Auger-Aliassime and the 2nd seed Stefanos Tsitsipas are the players to beat in the bottom quarter, hoping to reach the semis and remain on the title course. In the last year's final, Novak Djokovic won the fifth title in Paris and the 34th Masters 1000 crown, defeating Denis Shapovalov 6-3, 6-4 in an hour and five minutes.

Competing in his first Masters 1000 final, Denis couldn't follow Novak's pace, winning three out of 17 points on the second serve and suffering one break in each set to propel the Serb over the finish line. Djokovic landed 71% of the first serve in, dropping ten points behind the initial shot to sail through his service games, repelling the only break point he faced and standing strong from start to finish to lift the trophy.

Taming his strokes nicely, Novak had ten winners and seven unforced errors, leaving Shapovalov to make more winners and more errors (a 24-22 ratio). Novak had the advantage in the shortest rallies up to four strokes after hitting 56% of service winners, delivering one easy point on serve after another and having the upper hand in the more extended exchanges as well to earn the triumph. 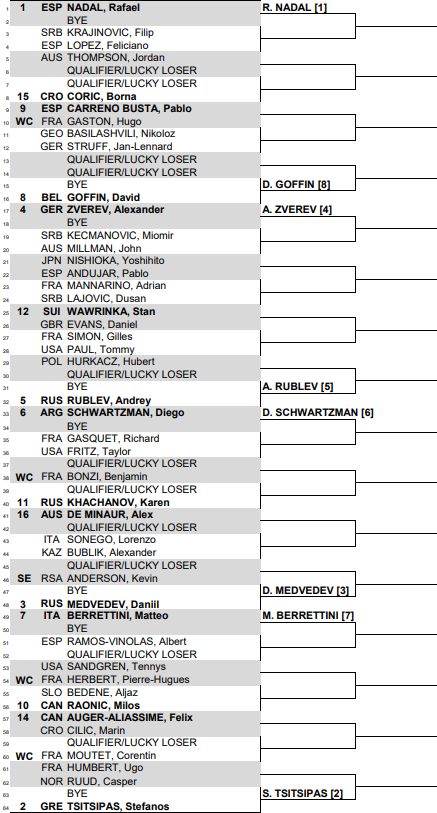