All eyes will be set on Roger Federer next week, with the 20-time Major champion returning to action after 14 months. The three-time Doha champion will seek the first crown since 2012, entering the draw as the 2nd seed behind Dominic Thiem.

Roger's most recent match came on January 30, 2020, in the Australian Open semi-final against Novak Djokovic, losing in straight sets and skipping the rest of the season due to knee issues. Federer underwent surgeries in February and May and decided to put a curtain on 2020 and make a fresh start in 2021.

Dominic Thiem and Roger Federer are the top seeds in Doha.

Federer couldn't recover in time for the Australian Open and will make a long-awaited return in Doha against six top-20 rivals. The US Open champion Dominic Thiem is the top seed, facing the Australian Open semi-finalist Aslan Karatsev in a tricky second-round encounter.

The 2019 champion Roberto Bautista Agut hopes to find the form for the first time this season against a giant server Reilly Opelka. The winner of that one facing Alexander Bublik before the quarter-final duel with Thiem or Karatsev.

The defending champion Andrey Rublev is still active in Rotterdam and will have to beat Stan Wawrinka or another Rotterdam semi-finalist Marton Fucsovics en route to the semi-final in Doha. Denis Shapovalov, David Goffin, Filip Krajinovic, Taylor Fritz, and Lorenzo Sonego are gathered in the third quarter, hoping to score two or three wins and advance into the semis where they could meet Roger Federer.

The 20-time Major champion will kick off the campaign against Daniel Evans or Jeremy Chardy in the second round, training with the Briton in Dubai in the previous days! The Rotterdam semi-finalist Borna Coric or John Millman are Roger's potential quarter-final rivals, and it should be interesting to watch the Swiss star in action after such a long break and two surgeries. 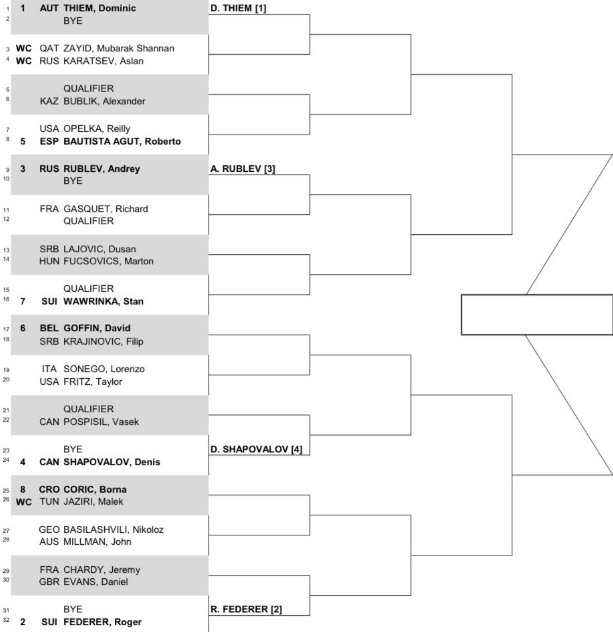