After keeping his schedule hidden following the quarter-final Doha loss, Roger Federer decided to embrace the clay swing this spring and compete at the home ATP 250 Geneva Open next week. Staged at the Tennis Club de Genève at Parc des Eaux-Vives, the oldest and largest tennis club in Switzerland, the Banque Eric Sturdza Geneva Open returned to the ATP calendar in 2015 after closing its gates for the professional players in 1991.

The Geneva Open stayed away from the calendar last year, like the entire European spring clay swing due to the pandemic, returning after this week's Masters 1000 event in Rome. Initially, Geneva was supposed to go on right before Roland Garros, making it harder for the top-ranked players to enter and risk anything ahead of the season's second Major.

When the Roland Garros organizers moved their event for one week, they left enough time for those who play in Geneva to recover physically.

Roger Federer returns to action for the second time this year after Doha.

Under new circumstances, the Geneva Open organizers hoped to draw some big names for the sixth edition, doing their best to sign the home star Roger Federer.

Struggling with a knee injury, Federer underwent two surgeries in 2020, skipping the entire season after the Australian Open and making a long-awaited return this March in Doha after 13 months. Roger played two matches and decided to rest and skip Dubai and Miami, staying at home and sharing no news about the clay swing.

Recently, the Swiss announced he would play in Geneva and Paris, entering the next week's draw as the top seed and seeking the first ATP title on clay since Gstaasd 2004! In his third match of the season, Federer will face Jordan Thompson or Pablo Andujar in the second round, seeking his first ATP win on clay since the Roland Garros quarter-final two years ago.

In the quarters, Federer will face Marin Cilic, Marton Fucsovics, Cristian Garin or the young Swiss Dominic Stephan Stricker, who received a wild card. Casper Ruud leads the second quarter, skipping the Rome Open to recover after a deep Madrid Open run and hoping for another notable result on his favorite surface.

Grigor Dimitrov asked for a wild card and will be the 4th seed, leading the third quarter with Adrian Mannarino, Fernando Verdasco and the Rome semi-finalist Reilly Opelka. Denis Shapovalov, Fabio Fognini, Laslo Djere and Guido Pella are in the bottom quarter. 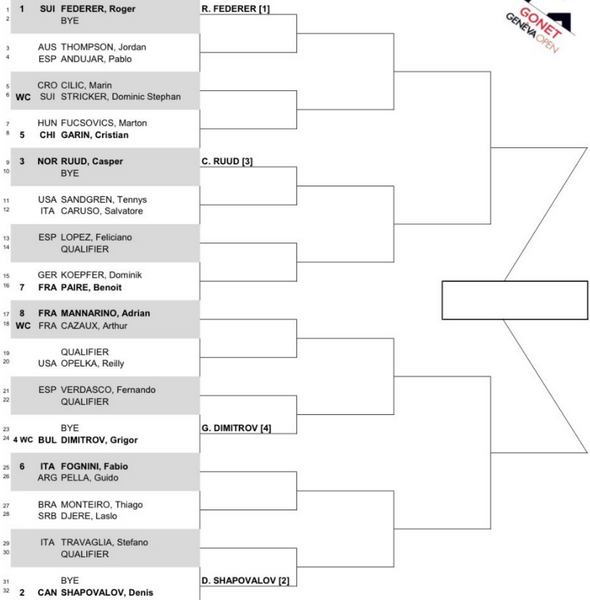