It's been only a few months since our first test with String-Kong. In that time, we’ve already reviewed the Gorill-1, a powerful and versatile monofilament, which roused our curiosity about the company’s other products.

The obvious choice for our next review was the Yeti, the company’s flagship string. The string is available in two gauges: 1.26 and 1.17. As we will see in more detail below, both have their own character and do much to stand out in a crowded marketplace.

The Yeti is a latest generation polyester monofilament, round in shape and available only in white. The two available gauges are 1.26 and 1.17, and the string has been designed to be ultra-durable.

We tested the strings both on the court and in our “laboratory,” but our emphasis on the latter was limited. Though we do find it interesting to analyze chemical compositions and to observe string behavior when placed under machine pressure, the most fundamental issue is how the strings feel in play. So that was our main focus when testing the strings. 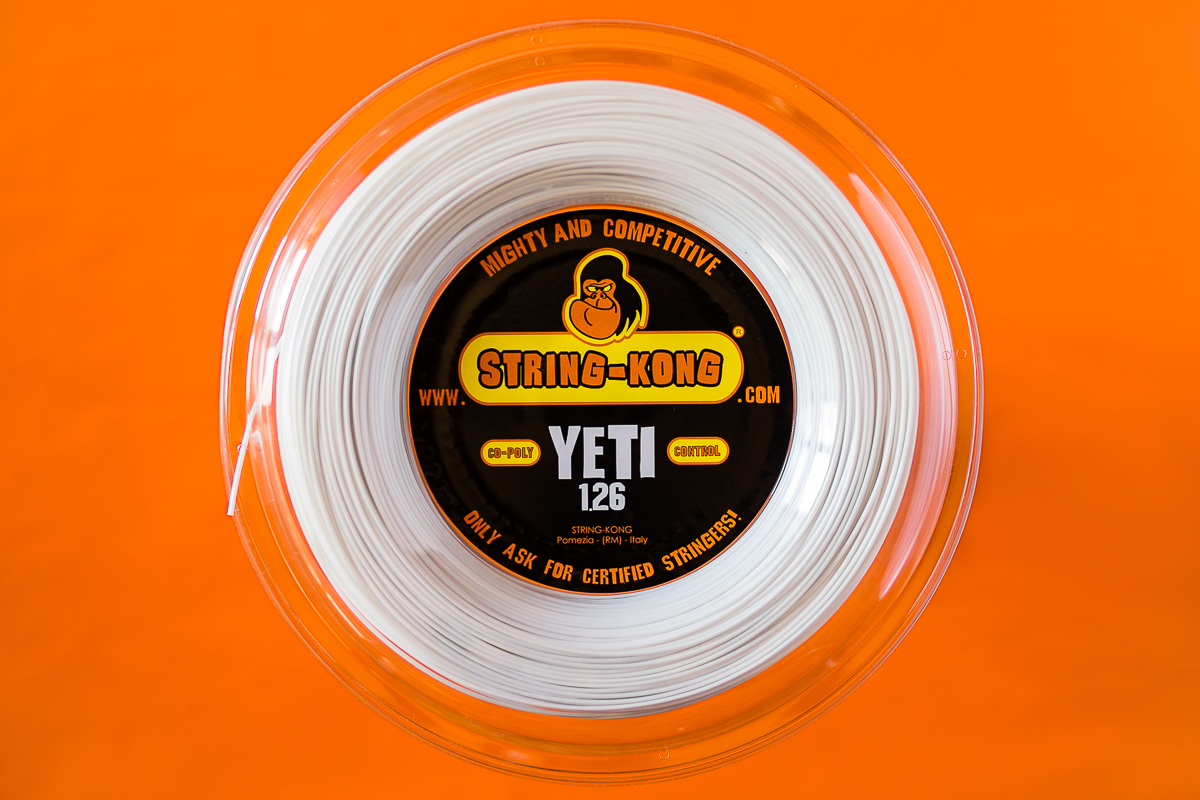 We weighed 5 individual 200m string lengths, as well as 12 separate packs of 12.2m, for both string gauges. As with the Gorill-1, the weight variations were very small in all instances. For the 200m length the difference was 2g at the most and on average just 1g. The 12.2m saw a maximum variance of just 0.3g, with an average of 0.2g. These are some impressively consistent numbers, better than most similar products on the market.

We took 4 sets of each kind and made 10 measurements. The result was a maximum variance of +/- 0.02mm, with an average deviation of close to 0. To within a hundredth of a mm, the strings conformed to the manufacturer’s specifications.

According to or stringers, the Yeti is a very nice string to work with. Neither the bulk string nor the smaller packs had much in the way of “curling” or shape memory. They reported a satisfying overall smoothness, especially with the 1.17 gauge.

The advice that the manufacturer gave us before testing was to go down at least 1-2kg from the usual tension used for monofilaments. We received this suggestion with some skepticism, simply because we have heard similar lines from manufacturers before, only to have the advice be completely useless. In this case, however, we must admit that the guidance proved accurate. One of our testers even went down as much as 3kg and loved it.

On the court, the Yeti proved to be very embodiment of control, both in terms of directional accuracy and depth. Contact is crisp and satisfying with a smooth follow-through. The string also has a very characteristic sound when hitting hard shots such as serves and flat groundstrokes.

The ball does not spend much time on the strings during impact, but there is no sense of dealing with a hard string. Comfort levels are very high, especially compared to similar top-tier strings. The 1.17 gauge in particular is very comfortable to play with.

The string is very “faithful” in that it basically executes your shot without adding or subtracting too much from it. It will not bail you out if you hit your shot off-center, so you need a good arm and decent technique to get the most out of this string. But if you have any measure of either of those things, this string will prove extremely accurate and rewarding.

As we wrote at the beginning of the article, each gauge has its own identity. The 1.26 is much more “spin-friendly,” enabling the player to hit very feisty kick serves and slices. Our level 2 and 3 testers found this gauge able to impart extreme levels of spin, even when compared to similar strings on the market. That being said, the string does require some skill to use properly, and is not recommended for level 4 players, even though it does allow you to easily generate spin.

As for the 1.17 gauge, there is a good deal of power, which is combined with an excellent sensitivity and good comfort. This gauge is best suited to players who like to hit hard and flat.

The Yeti prides itself on being a durable string, and that certainly proved to be true during our testing. Even in the hands of a semi-pro, the strings lasted for a very long time. To give you some idea, we would guess the 1.26 and 1.17 compare, in terms of durability, to most 1.30 and 1.24 gauges from other brands.

We asked the company’s owner, Ivan Buffoni, about the thinking behind the string’s design and durability.

“One of the objectives we set ourselves with the Yeti was to create a string that was light and extremely durable. We managed to do this, and the benefits are obvious. We have a 1.17 gauge that lasts like a 1.25 and yet it’s 3g lighter. And 3g equates more or less to 6pt less in swingweight! So thanks to this you have a faster swing, and the speed of the swing is so important.”

Again at Ivan's suggestion, we gave our more advanced testers a hybrid 1.26/1.17, which he claimed a lot of his contract players are using. This is a very interesting idea, as a mono/mono hybrid of different gauges is not something you see every day. But we can definitely say that the results were overwhelming during testing. Compared to a racket fully strung with Yeti 1.26, it was like pouring an energy drink onto the strings: ball speed and sensitivity were markedly higher, while spin and control received similar boosts.

The Yeti is a very unique string, so much so that there is nothing to really compare it to on the market. Control, control and more control: this seems to be the string’s mantra. Again and again, the consistency and accuracy of the Yeti proved itself, and given that it is no slouch when it comes to generating topspin, it’s hard to find a fault here.

But who would we recommend this string to? Well, beginners need not apply, as we mentioned before. The Yeti requires an experienced hand to make the most of it, and is best suited to players who like to hit the ball hard and flat.

The thinner gauge is slightly more forgiving, given its added sensitivity, but it still requires some skill to use to its fullest potential. The 1.17 is especially effective for “old school” players who like to hit flat with a continental grip, but it’s equally suited to advanced, more modern-minded players. Also, the combination of the two gauges on the same racket is not to be underestimated, as they perfectly compliment one another.

Finally, special mention must be made of the string’s comfort. Yes, one does need to be physically fit and technically adept in order to fully exploit these strings, but they are arguably the most comfortably high-end strings out there at the moment, and certainly have the least impact shock on each stroke.

Ultimately the Yeti is as good as its name: a real beast. If you have the skill to tame it, the world is yours for the taking.

Before concluding, we would like to thank the DNA Tennis Shop, Lab of Milan and Marco Rossani for providing all the testing materials. As an official stringer for events such as Wimbledon, he certainly knows his stuff and is always very helpful in our review efforts.