Tennis - Indian tennis ace Mahesh Bhupathi may have gone into retirement quietly after failing to enter the Wimbledon doubles event, which he had announced would be his final tournament before retiring. In an interview a few weeks ago, Bhupathi claimed, "Wimbledon 2014 will be my last slam.

To be honest I am already starting to miss professional tennis having played at the highest level for two decades. It is what has given me my identity and I will miss every bit of the action. The thought that I will not be playing anymore is daunting.

I will be pairing up with Marcin Matkowski at Wimbledon and hope to do well in my last outing at SW19. I am glad that Wimbledon is my last slam. I love the atmosphere and courts of SW19 and it is an addiction, which I will find tough to give up." There was no official word or statement as to why Bhupathi's name was not part of the draw after he indicated that he would be pairing up with Marcin Matkowski at SW 19.

But Matkowski instead paired up with Colombian Juan-Sebastian Cabal and the duo are seeded 15th in the draw. As recently as June 2nd, Bhupathi indicated that he was planning to play in London when he sent this tweet - Tip to self: no matter how excited you are to play Wimbledon, 11 am is not the right time to practice in Mumbai #mandown @Wimbledon A week before that, the Indian, who turned 40 years old on June 7th, tweeted, "I was expecting this retirement stuff to be easy..

NOT!!!! Heart wants to be in Paris, Legs have a different opinion..#RolandGarros" In 1997, Bhupathi became the first Indian to win a Grand Slam tournament when he partnered with Japan's Rika Hiraki to win the French Open mixed doubles title.

The Indian went on to win 12 Grand Slams in all - four of them in men's doubles with partner-turned-rival Leander Paes and eight of them in the mixed doubles category. Bhupathi attained the world no. 1 ranking in 1999 and won 52 titles in all.

As a singles player, he peaked at no. 217 in the world and played in the main draw of a Grand Slam on four occasions. 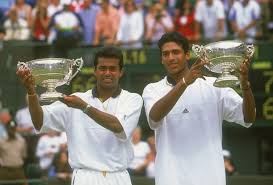 Bhupathi is currently ranked no. 139 in the world and his injuries and business interests limited him to only 3 tournaments this year, the last of which was at Miami in March.

Bhupathi has been busy getting top players together for his brainchild project - the International Tennis Premier League which is expected to kick off later this year. With his ranking dipping and his business empire growing, it is unlikely that we would see Bhupathi back on the tour once again.