What were the best fashion moment of 2020, in the outfits battle among Maria Sharapova, Naomi Osaka, Serena Williams and the others? The tennis season that has just ended was, however, memorable for its exceptionality and particularity.

But in addition to the moments on the court, the protagonists of 2020 were also social stars, immortalized either on their social channels or in magazines, showing the fashion and glamor side of off-court tennis The gorgeous dress and high hair shown by Maria Sharapova are one of the best fashion moments of 2020.

A very beautiful dress, accessorized but always refined and elegant. Although Masha has left the court, she remains one of the brightest stars in women's tennis. 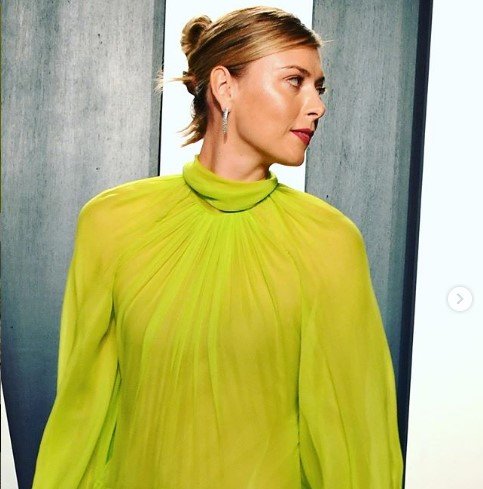 Naomi Osaka, winner of the US Open, in which she wore a gorgeous orange and shortened version of the traditional Haitian dress, with a similar look as a testament to the heritage from her fatherly side.

Iga Swiatek, for the photo shoot after the victory at Roland Garros, wore a dress from the Galeries Lafayettes, immortalized on the same roof of that Parisian department store, with a dress by Parisienne et Alors. Serena Williams, for the November issue of British Vogue, in the Dolce & Gabbana ensemble and in the Tricker's moccasins, showed herself in a refined and elegant beauty: a woman of the past but perfectly at ease in the modern context.

A simply perfect outfit for Serena.

Grigor Dimitrov and Stefanos Tsitsipas were two other off-court fashion symbols of 2020.

Grigor, with trendy trousers and tie in a beautiful background, Stefanos almost all white, with scarf and Ray-Ban.

To conclude Johanna Konta, with a superb contrasting dress: class and beauty in a perfect mix.

The greatests tennis stars on the planet, like Novak Djokovic, Rafael Nadal, Andy Murray, Serena Williams, Naomi Osaka, Ashleigh Barty, Simona Halep and all the others, will come back for the upcoming Australian Open 2021, which will be held in Melbourne from 8 February: it will be the most awaited sports event of the first part of the new season.

It will be a very spectacualr season, and all of us hope without the problems of the last one, with some presence of the crowd in the courts across the world. Roger Federer, after he said he will not play the Australian Slam, should come back on the court, for the joy of his fans, at the end of February or at the beginning of March.

The new season has yet to begin but there is already a desire to put a disastrous 2020 behind us from all points of view and start the new year with the first Grand Slam of the year in the hope that the pandemic can slowly regress and bring back the planet to live seriously and also allow the world of sport to perform in front of the general crowd.

Italian Open: the future of the Foro Italico foresees a restyling
Jannik Sinner: what a crazy statistic!
Mouratoglou: "Carlos Alcaraz and Rafael Nadal's differences and similarities"
Naomi Osaka the most hated player on Twiter
TODAY'S MOST POPULAR
RAFAEL NADAL
Alexander Zverev makes interesting comment about Rafael Nadal, Spaniard responds
Rafael Nadal: 'I suffered after Rome, but I feel better now. Otherwise..'
Jo-Wilfried Tsonga ahead of final tournament: I feel both relieved and excited
Daniil Medvedev does not plan to take legal action against Wimbledon
Iga Swiatek imitates Rafael Nadal before the service: THE SHOW of the Pole
Gilles Simon opens on his upcoming retirement
'Rafael Nadal didn't have a great claycourt season in...', says top coach
Pam Shriver: With Serena Williams out, Iga Swiatek now has the most feared shot
'It was an honor to be able to face Roger Federer', says former Top 10
ATP Lyon: Alex Molcan invents a shot never seen before
THIS WEEK MOST POPULAR
TENNIS INTERVIEWS
Emma Raducanu: "I could skip the Roland Garros if..."
Patrick McEnroe explains the difference between Iga Swiatek, Serena Williams
Novak Djokovic to lose ATP throne, as ATP cancels points at Wimbledon 2022
Venus Williams took a public bus to go to F1 Miami GP!
Novak Djokovic weighs in on possibility of Wimbledon losing ranking status
Boris Becker moved to more comfortable part of prison following his complaints
Elina Svitolina announces pregnancy
'He neutralizes Roger Federer's serve like nobody else', says expert
Serena Williams and her new amazing Lincoln Navigator!
Alexander Zverev opens on his relationship with Stefanos Tsitsipas