With 20 Major titles on each's tally, Roger Federer and Novak Djokovic have been the most prominent players at Majors alongside Rafael Nadal. Roger and Novak are at the top when we talk about the number of Major finals played, with Djokovic catching Federer on 31 following an incredible season in the most notable scene and four Major title matches under his belt in 2021.

As we already said, Novak and Roger have won 20 of those finals, and they top the charts when we talk about the number of losses in Major finals in the Open era. Two legends are tied with Ivan Lendl on 11, leaving Andy Murray and Rafael Nadal on eight Major finals defeats and standing at the top.

Ivan Lendl claimed eight Major crowns from 19 finals, struggling to claim the first Major trophy and finishing his career with 11 defeats in the most notable matches. Roger Federer stood far away from that number after conquering the first seven Major finals he had entered before Rafael Nadal toppled him at Roland Garros 2006.

Until the 2007 US Open, the Swiss secured 12 Major titles from 14 finals, experiencing his only defeats against Nadal in Paris. Between 2008-2015, Roger finished runner-up in eight of his 13 Major finals before bouncing back in 2017 and 2018 with two Australian Opens and one Wimbledon crown.

In his last Major final so far, Federer squandered two match points against Novak Djokovic in that epic 2019 Wimbledon final that went into a deciding tie break at 12-12 and lasted for almost five hours.

The Serb suffered a 6-4, 6-4, 6-4 defeat to Daniil Medvedev in the US Open title clash, failing to win the 21st Major crown and achieve the first calendar Grand Slam since Rod Laver in 1969. Novak was victorious in five of his first seven Major title clashes before experiencing five defeats between Roland Garros 2012-2014 despite having the edge over his rivals in those years.

The Serb is 14-4 in the previous 18 Major finals since Wimbledon 2014, matching Federer and Nadal on 20 Major shields but still losing enough title matches to enter the exclusive group with Federer and Lendl. 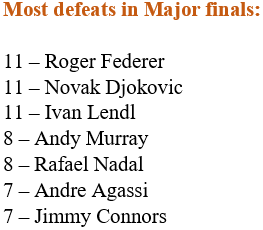