Just eight days after losing the US Open final and missing a chance to achieve a calendar Grand Slam, Novak Djokovic has earned a ranking milestone on Monday. The 20-time Major winner became the fifth player since the start of the ATP ranking in 1973 with 700 weeks in the top-10, joining Roger Federer, Rafael Nadal, Jimmy Connors and Andre Agassi on the exclusive list.

Novak claimed his first professional title in 2003 at 16 and finished the following season inside the top-200. Making a Major debut at the Australian Open 2005 as a qualifier, Novak was ready to challenge better-ranked opponents that year, earning at least one win at the following three Majors and wrapping up the year in the top-100 for the first time despite a light schedule.

The sky was the limit for the Belgrade native after delivering 40 ATP wins in 2006, advancing into the quarter-final at Roland Garros and lifting the first ATP trophy in Amersfoort in July. In October, Djokovic was the last man standing in Metz, carving the way towards the top-20 and preparing an even stronger assault in 2007.

Losing the first Masters 1000 final at Indian Wells in March, Novak collected enough points to find himself in the top-10 for the first time. The Serb performed as the top-10 player in Miami and went all the way for the most notable title before turning 20.

As we all know, the rest is pretty much history, as Djokovic secured a place among the most outstanding players a long time ago. Since 2011, Novak has been the leading figure of men's tennis, reducing the deficit to Roger Federer and Rafael Nadal and looking eager to catch their Major tally.

Novak had spent 555 weeks in the top-10 before losing his spot in the elite group in November 2017, missing all the action after Wimbledon due to an elbow injury.

Novak Djokovic is the fifth player in the Open era with 700 weeks in the top-10.

Djokovic needed half a year to recover his form and become a contender for notable titles again, raising his level in May and June 2018 and cracking the top-10 again after Wimbledon.

Standing among the players to beat in the last four years, Djokovic has earned many ranking records, including the most weeks as world no. 1. Novak has kept the ATP throne since February last year and his eighth Australian Open title, standing strong and keeping the young guns behind him.

The Serb claimed three out of four Major titles in 2021, losing the US Open final to Daniil Medvedev but still looking good to wrap up the season at the top and secure his record-breaking seventh year-end no. 1 honor. 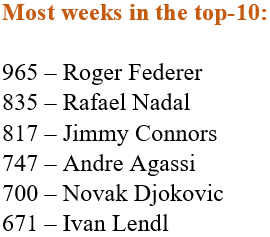