The 30th edition of the Dubai Duty Free Tennis Championships takes place next week and gathers a strong field of players in the quest for the title and 500 ATP points. All eyes are set on the 20-time Major winner Novak Djokovic, who returns to action for the first time since the last year's Davis Cup Finals.

After a terrible Australian saga and visa issues, Novak will kick off the season at one of his favorite events, seeking the sixth Dubai crown and the first since 2020. World no. 1 faces the young Italian Lorenzo Musetti in the first match.

Musetti pushed Djokovic to the limits in the opening two rounds at the last year's Roland Garros before falling apart after building that massive lead and retiring in the decider. Now, the youngster will have the second chance to fight against the world's leading player, who had been training hard at home in Belgrade in the last couple of months.

In the second round, Novak will face Karen Khachanov or Alex de Minaur if he beats Lorenzo, as the draw does not get any easier. In the quarter-final, the Doha champion Roberto Bautista Agut should be Djokovic's rival. The Serb will lose the no.

1 spot after over two years if Daniil Medvedev wins the ATP 500 event in Acapulco. Felix Auger-Aliassime and Denis Shapovalov are the players to beat in the second quarter, with Nikoloz Basilashvili, Jan-Lennard Struff, David Goffin and Marton Fucsovics as their rivals.

Novak Djokovic will play his first match of the season in Dubai.

Jannik Sinner and Hubert Hurkacz are the seeded players, with Andy Murray and Alexander Bublik hoping to spoil their party and advance into the last four.

Sinner will play his first professional match without Riccardo Piatti as his coach, and he faces Alejandro Davidovich Fokina in the first round. The 2nd seed Andrey Rublev is through to the title match in Marseille and will play against Daniel Evans in the first round if he decides to enter Dubai.

"This is the 30th year of the Dubai Duty Free Tennis Championships, and I'm happy to say that during that time, we have had more than 21 No. 1's participate in the tournament. Novak Djokovic is among them, and we are delighted to welcome him to Dubai once again and wish him well as he attempts to win his 87th career title," McLoughlin, Executive Vice-Chairman and CEO of Dubai Duty Free, said. 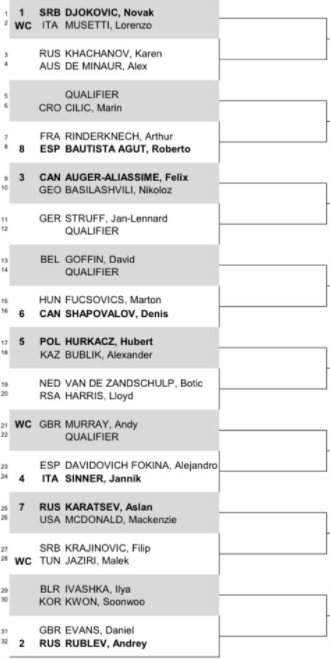