Novak Djokovic will compete in his 127th ATP final in Tel Aviv on Sunday, facing Marin Cilic in a battle for the trophy. Novak is through to his fourth ATP final of the season, achieving that for the 15th time in the past 16 years and moving closer to Rafael Nadal.

With 127 ATP title matches under his belt, Novak stands fourth in the Open era, only three behind Rafa, who is on 130. Djokovic is playing his first singles tournament since winning his seventh Wimbledon in July, defeating three rivals to remain on the title course.

Pablo Andujar stood no chance against the Serb in the second round, and Vasek Pospisil fought better in the quarter-final. Novak beat his good friend 7-6, 6-3 and set the semi-final clash against Roman Safiullin. The Serb toppled the Russian 6-1, 7-6 in an hour and 34 minutes to advance into the final.

Roman was a promising junior, and he tries to establish himself as a top-100 player after dealing with injuries for years. He gave his best against Novak in the second set before the Serb grabbed the tie break to seal the deal.

Djokovic played better behind the first and second serve and defended two out of three break chances to keep the pressure on the other side. Novak dominated the second serve return and grabbed three breaks from seven opportunities to emerge at the top.

Djokovic had the upper hand in the shortest and mid-range rallies, taming his strokes nicely and bouncing back after losing serve in the second set's closing stages. The Serb held in the encounter's opening game with a service winner and broke the Russian in game two after Roman's double fault.

Novak landed a service winner for a 3-0 advantage and earned more break points in the next one. Safiullin defended four break points before Djokovic seized the fifth to build a 4-0 lead. Novak extended the gap with an ace in game five after 17 minutes before Roman got his name to the scoreboard with a forehand winner.

Novak Djokovic is through to his 127th ATP final.

Djokovic served for the set in game seven and held at love to claim it 6-1 in 23 minutes, hoping for more in set number two. Safiullin made a better start and landed an ace in game three for 2-1, already doing more than in the opener.

The Russian earned his first break point in game six, and the Serb denied it with a booming serve. Novak repeated that on the second break point and brought the game home with an ace for 3-3. Roman squandered a game point at 4-4 and experienced a break after Novak's volley winner at the net.

Djokovic served for the victory in game ten and suffered a surprising break after a costly double fault. Both players served well in the next two games to introduce a tie break. The Serb opened a 4-1 gap after the Russian's double fault and earned four match points when Roman played a loose forehand in the eighth point.

Novak seized the second at 6-3 with an ace to emerge at the top and move into his 127th ATP final. 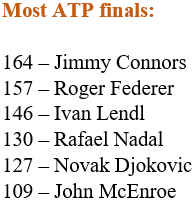