Since the Masters 1000 series started, there have been 72 indoor tournaments. Between 1990 and 2008, players were battling for two indoor Masters 1000 titles, and the Paris Masters remained the last dinosaur in 2009. Pete Sampras, Boris Becker and Roger Federer were the players to beat in terms of the number of victories, achieving between 47 and 41 to top the charts.

Novak Djokovic scored six triumphs in Madrid between 2006 and 2008 and earned his first indoor Masters 1000 crown in Paris in 2009. The Serb has been a player to beat in the French capital since 2013, lifting six trophies from eight finals and passing the mentioned legends.

Novak played his eighth Paris Masters final last Sunday and lost to the 19-year-old Holger Rune. Djokovic did not earn his seventh crown in the French capital, but he made an impressive record. Novak became the first player with 50 indoor Masters 1000 wins, standing on 51 and leaving Pete Sampras on 47.

Djokovic is 45-9 in Paris, with four wins coming last week. Novak kicked off the action against Maxime Cressy and prevailed 7-6, 6-4 in an hour and 43 minutes. Djokovic had to stay focused against a dangerous serve & volley player and hold everything under control in his games.

Novak lost six points behind the initial shot and kept the pressure on the other side. The American gave his best to stay competitive, hitting 15 aces and ten double faults and rushing to the net almost 50 times. Cressy saved four out of five break points and led 4-3 in the second set before Djokovic delivered his lone break and rattled off three straight games to emerge at the top.

The Serb beat Karen Khachanov 6-4, 6-1 in the third round to advance into the quarter-final. He stormed over Lorenzo Musetti 6-0, 6-3 in 74 minutes for a place in the semi-final, becoming the first player with 50 Masters 1000 indoor wins.

The 51st came against Stefanos Tsitsipas after a massive battle. Djokovic prevailed 6-2, 3-6, 7-6 to set the title clash against the young gun Holger Rune. Seeking his seventh Paris Masters crown, Novak experienced a tough 3-6, 6-3, 7-5 defeat in two hours and 33 minutes.

The Serb won the opener and had three break chances at the start of the second set. The Dane saved them and grabbed an early break that forced a decider. Novak led 3-1, 40-30 before Holger extended the fifth game and broke back to increase the drama.

A teenager grabbed a break at 5-5 and served for the victory in the next one. Djokovic wasted six break points in the 12th game to propel his rival toward the first Masters 1000 crown at 19. 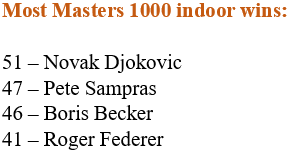