Novak Djokovic and Rafael Nadal have been the dominant figures at the Masters 1000 series. The legendary duo has earned records that will take some beating in the future, including the number of titles and many others. Novak missed a chance to claim his 39th title last Sunday at the Paris Masters, losing in three sets to the young gun Holger Rune.

Djokovic added his 42nd Masters 1000 bagel to his tally, moving four clear of Nadal, who stands at 38. Their closest rivals are far behind, with Roger Federer and Andre Agassi winning a 6-0 set 21 times. Novak's 42nd Masters 1000 bagel came against Lorenzo Musetti in the quarter-final, as the Serb beat the Italian 6-0, 6-3 in 74 minutes for a place in the last four.

Djokovic served at 55% and lost only nine points behind the initial shot, getting broken once at the start of the second set. Musetti needed more to remain competitive after dropping 57% of the points in his games, offering Djokovic 11 break points and dropping serve five times.

Novak Djokovic has scored 42 bagels in the Masters 1000 matches.

Novak had 14 winners and 15 unforced errors, while Lorenzo stayed under ten direct points and counted almost 30 unforced mistakes. The Serb had a massive advantage in the shortest range up to four strokes, while outplaying the rival in the more extended ones.

Novak held at 15 in the encounter's first game with a service winner and grabbed an early break when Lorenzo netted a forehand in the next one. Djokovic closed the third game at love and seized the second opportunity on the return after Musetti's loose backhand for 4-0.

The Serb fired another booming serve in game five, and the Italian served to stay in the set. With nothing working his way, Musetti sprayed another backhand error in game six. Thus, he experienced the third break and allowed Djokovic to deliver a bagel in swift 24 minutes.

The youngster raised his level at the start of the second set. He clinched a break at 15 in game three after Djokovic's forehand error to settle into a fine rhythm. Novak started all over and converted the fourth break chance in game four to lock the result at 2-2 and regain momentum.

The Serb held at love in game five and delivered the crucial break in the next one after the Italian's wayward backhand. Novak moved 5-2 ahead and served for the victory in game nine. Djokovic produced a hold at love to emerge at the top and move into the last four. 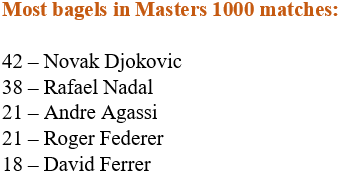