Rafael Nadal and Novak Djokovic earn many Masters 1000 records that will take some beating in the future. Among other honors, Rafa and Novak are the only players with over 70 Masters 1000 semi-finals, with the Spaniard standing on 76 and the Serb on 74.

Nadal delivered six Masters 1000 semi-finals in 2019, and the previous three seasons have not been that well for him. Rafa secured three semi-finals since the start of 2020, failing to become the first player with 80 appearances in the last four at the Masters 1000 level.

Thus, Djokovic will have a chance to pass Nadal and become the leader of the pack in 2023 if he delivers his best tennis at the elite ATP level. Novak kicked off the Paris Masters action against Maxime Cressy and prevailed 7-6, 6-4 in an hour and 43 minutes.

Novak lost six points behind the initial shot and kept the pressure on the other side. The American gave his best to stay competitive, hitting 15 aces and ten double faults and rushing to the net almost 50 times. Cressy saved four out of five break points and led 4-3 in the second set before Djokovic delivered his lone break and rattled off three straight games to emerge at the top.

The Serb beat Karen Khachanov 6-4, 6-1 in the third round to advance into the quarter-final. He stormed over Lorenzo Musetti 6-0, 6-3 in 74 minutes for a place in the semi-final, becoming the first player with 50 Masters 1000 indoor wins.

Novak claimed the opener in no time and had the upper hand in the second after an early setback for a convincing victory and his 74th Masters 1000 semi-final. Seeking a place in his eighth Paris Masters final, Djokovic prevailed over Stefanos Tsitsipas 6-2, 3-6, 7-6, standing three points away from defeat in the deciding tie break. 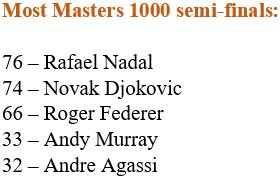