Novak Djokovic, Rafael Nadal and Roger Federer keep many Masters 1000 records. The famous trio set the bar high and achieved things that will take some beating in the future. Djokovic, Nadal and Federer are the only players with 50 Masters 1000 finals, competing in 159 combined and standing six within each other.

The Serb played in two title matches this year, winning the crown in Rome and finishing runner-up in Paris. The Paris Masters was Novak's 56th Masters 1000 final, playing for the title for the eighth time in the French capital and seeking the seventh title.

Novak kicked off the action against Maxime Cressy and prevailed 7-6, 6-4 in an hour and 43 minutes. Djokovic lost six points behind the initial shot and kept the pressure on the other side. The American gave his best to stay competitive, hitting 15 aces and rushing to the net almost 50 times.

Cressy saved four out of five break points and led 4-3 in the second set before Djokovic delivered his lone break and rattled off three straight games to emerge at the top.

The Serb beat Karen Khachanov 6-4, 6-1 in the third round to advance into the quarter-final.

Djokovic defeated Khachanov for the eighth time in nine matches, experiencing the only defeat in the Paris Masters final four years ago. The Serb lost serve once and delivered four breaks from eight opportunities to control the scoreboard and sail into the last eight.

Novak tamed his strokes nicely and hit 18 winners and 16 unforced errors. He had more service winners than Khachanov, outplaying him from the baseline and in the shortest and more advanced exchanges. A six-time champion stormed over the young Italian Lorenzo Musetti 6-0, 6-3 in 74 minutes for a place in the semi-final, becoming the first player with 50 Masters 1000 indoor wins!

Novak claimed the opener in no time and had the upper hand in the second after an early setback for a convincing victory. Seeking a place in his eighth Paris Masters final, Djokovic prevailed over Stefanos Tsitsipas 6-2, 3-6, 7-6, standing three points away from defeat in the deciding tie break before emerging at the top. 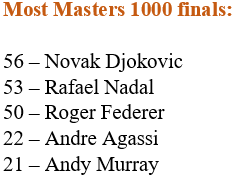