Novak Djokovic has been one of the finest players at indoor Masters 1000 events, standing alone with over 50 victories and six titles. Novak became the only player with 50 indoor Masters 1000 wins a few weeks in Paris, but the seventh indoor Masters crown slipped out from his hands following a tight loss to Holger Rune.

While missing the title, Djokovic collected more notable achievements at the Masters 1000 level. Paris was Novak's eighth indoor Masters 1000 final, leaving his former coach Boris Becker on seven and topping the charts. Since the Masters 1000 series started in 1990, there have been 72 indoor tournaments.

Between 1990 and 2008, players were battling for two indoor Masters 1000 titles, and the Paris Masters remained the last dinosaur in 2009. It was the season when Novak reached his first indoor Masters final, with more to come since 2013.

Djokovic has been a player to beat in Paris ever since, securing every record at the season's last Masters 1000 event and standing as a proud owner of six titles. Djokovic had to work hard in the second round against the attacking American Maxime Cressy.

The Serb scored a 7-6, 6-4 triumph in an hour and 43 minutes, staying focused and keeping the pressure on the other side. Novak lost six points behind the initial shot and converted one out of five break points to make the difference.

Cressy led 4-3 in the second set before Djokovic rattled off three straight games to emerge at the top.

Novak ousted Karen Khachanov 6-4, 6-1 in the third round after another rock-solid performance.

The Serb got broken once and produced four breaks from eight chances to control the scoreboard and sail into the last eight. Not stopping there, Djokovic crushed the young Italian Lorenzo Musetti 6-0, 6-3 in swift 74 minutes.

The Serb became the first player with 50 indoor Masters 1000 wins and set the semi-final clash against Stefanos Tsitsipas. Djokovic had to work harder against a fellow top-10 rival, prevailing 6-2, 3-6, 7-6 for a place in the title clash, his eighth in Paris.

Novak made a perfect start and outplayed the rival from the baseline in the opener. Stefanos responded in the second set and stayed competitive in the decider until the tie break. They were locked at 4-4 before Djokovic shifted into a higher gear to emerge at the top and move into the final.

Novak battled against Holger Rune and suffered a 3-6, 6-3, 7-5 loss after a thriller, missing a chance to add the 39th Masters 1000 crown to his tally. A teenager started all over from the second set and erased a break deficit in the decider to emerge at the top and steal the crown from the favorite. 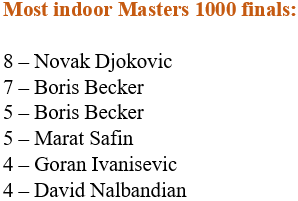