Carlos Alcaraz, Novak Djokovic and Rafael Nadal have been the season's best players. The trio claimed all four Major titles in 2022 and would have been ranked inside the top-3 had Novak Djokovic gotten his 2000 points for Wimbledon and played the Australian Open and the US Open.

Alcaraz, Djokovic and Nadal are the only players with over $9,000,000 this year, with the young gun standing above the two legends. Carlos became the fifth player with $10,000,000 in a single season after Federer, Nadal, Djokovic and Murray.

The 19-year-old Spaniard wrote history books in 2022, becoming the first teenager with a Major title since Rafael Nadal and the youngest player on the ATP throne. Carlos kicked off the season from outside the top-30 and won the first title in Rio de Janeiro.

The young gun lost to Nadal in the Indian Wells semi-final before securing his first Masters 1000 crown in Miami over Casper Ruud. Carlos became the third-youngest Masters 1000 champion and carried that form to Barcelona, winning another title and cracking the top-10 at 18.

Alcaraz lifted his second Masters 1000 crown in Madrid following back-to-back wins over Rafael Nadal, Novak Djokovic and Alexander Zverev! The Spaniard lost two ATP finals on clay in July before heading to the US Open as the 4th seed.

Carlos saved a match point versus Jannik Sinner in the quarter-final and went all the way to win the title and write history. The Spaniard did enough to become world no. 1, finishing the season at the top despite playing only a couple of tournaments after New York.

Novak Djokovic missed the Australian Open, the US Open and four Masters 1000 events due to his vaccination status.

Still, the Serb did enough to finish inside the top-5, even without 2000 points for his 21st Major crown at Wimbledon.

Novak made a strong finish of the season and conquered Tel Aviv, Astana and the ATP Finals to prove his greatness again and gain a boost ahead of 2023. Rafael Nadal became the first player with 22 Major trophies after winning the Australian Open and Roland Garros.

The Spaniard was ready for more in the second part of the season, but an abdominal injury prevented him from performing at his best and chasing the ATP throne at 36. Nadal withdrew ahead of the Wimbledon semi-final with a seven-millimeter muscle tear, playing only nine matches by the end of the season and winning only four. 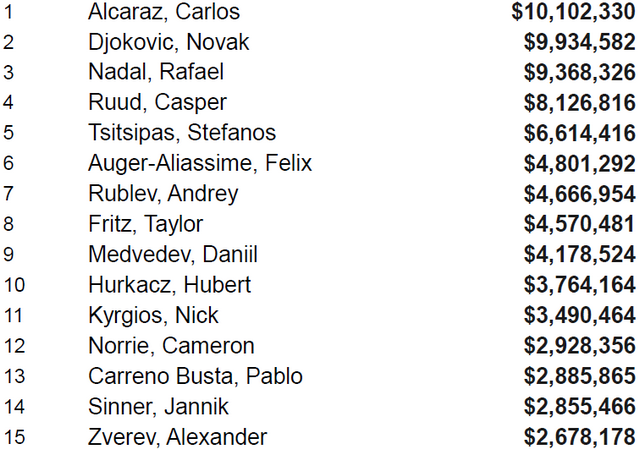