Scoring a bagel takes work, requiring a top-tier performance on serve and return. A 6-0 set boosts a player and gives him the confidence to continue at the same pace or to seal the deal in style. Bagel is especially welcomed at Majors when you need to save energy and endure challenging best-of-five duels.

Five players stand at the top of the list of bagels at Majors when we speak about the Open era. Andre Agassi leads the field with 50, followed by Roger Federer, four behind him. Rafael Nadal had 44 ahead of the Australian Open, and he got company in Melbourne following Novak Djokovic's two 6-0 sets.

Two great rivals are now tied, and Novak should have more chances to challenge Federer and Agassi in the coming years. Novak's 16th and 17th bagel at the Australian Open came against Roberto Carballes Baena and Enzo Couacaud in the opening two rounds.

Djokovic did not play at his best due to a hamstring injury but still did enough to collect two perfect sets.

Novak Djokovic and Rafael Nadal stand even at 44 bagels at Majors.

Novak kicked off his 18th Australian Open campaign with a 6-3, 6-4, 6-0 victory over Carballes Baena.

The Serb fired 41 winners and 21 unforced errors, delivering a couple of breaks in the opening two sets and saving the best for the third. Carballes Baena had nothing more left in the tank in the third set, failing to maintain his level and experiencing a bagel.

Novak turned the third set into a one-person affair, taking 24 out of 28 points and sailing over the finish line. Djokovic's 17th Australian Open bagel came in a 6-1, 6-7, 6-2, 6-0 triumph over a qualifier Enzo Couacaud. Novak dominated the sets he won and had a chance to avoid the fourth after wasting break chances in set number two.

The Frenchman took advantage of the Serb's leg issues and claimed it in the tie break to extend the battle. Novak started all over and grabbed the third set 6-2 to regain momentum. With a boost, Djokovic converted the fourth break chance in the fourth set's second game to move in front.

Novak saved the only break chance in the next one and drew Enzo's backhand error in the fourth to gain a 4-0 lead. The Serb hit two double faults in game five and still held after deuce for 5-0. Novak placed a drop shot winner in the sixth game for two match points and cracked a backhand down the line winner on the first to seal the deal and emerge at the top. 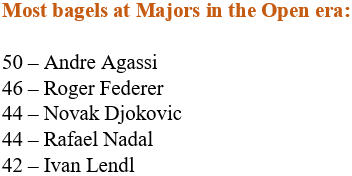