Chasing the first ATP title in Madrid since 2016 and the second of the season, Novak Djokovic has a lot to celebrate this week, becoming only the fifth player since 1973 who has spent 250 weeks on the ATP throne. Novak has joined an exclusive group of players (Roger Federer, Pete Sampras, Ivan Lendl and Jimmy Connors), moving closer to Federer's record and trying to extend the gap over the closest rivals before the second part of the season where he has a lot of points to defend.

Also, this is the 650th week for the mighty Serb in the top-20, becoming the eighth player who has done that since the start of the ATP ranking 46 years ago, adding his name next to Roger Federer, Jimmy Connors, Andre Agassi, Rafael Nadal, Ivan Lendl, John McEnroe and Pete Sampras!

Known as one of the most consistent players in the Open era, Novak cracked the top-20 for the first time in October 2006 at the age of 19, conquering two ATP titles and 40 matches on the Tour that season. For almost 12 years, Djokovic was a part of the elite group before dropping out in May last year after missing the second part of 2017 due to an elbow injury and mediocre results in the first five or six events in 2018.

Novak was ready to play at his best again in June, reaching the final at Queen's and conquering Wimbledon to improve the ranking position after seven weeks in total outside the top-20. After an exciting second part of 2018, Novak managed to steal the year-end no.

1 spot from injured Nadal and he has stayed there ever since, building his lead over the Spaniard and the rest of the field, ready to attack the ultimate ranking records in the following years. The Serb will have to spend 30 more weeks in the top-20 to catch Pete Sampras' 680 weeks in January next year and to wait for another year before closing on John McEnroe's 728.

Ivan Lendl is also there with 733, passed by Rafael Nadal who currently stands on 736 thanks to 14 consecutive years in the elite 20 company! Roger Federer, Jimmy Connors and Andre Agassi have all passed the 850-week mark and it should be interesting to see if Nadal and Djokovic can reach that milestone in the following seasons.

Players with the most weeks in the top-20: 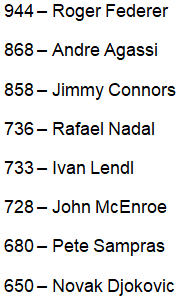