For the sixth time in the last nine years, Novak Djokovic is through to the Wimbledon final, earning a chance to compete for the fifth crown at the All England Club. The defending champion came at Wimbledon after a heartbreaking semi-final loss at Roland Garros that spoiled the opportunity for the second "Nole Slam," making Novak eager to prove his Grand Slam dominance once again at Wimbledon and go all the way.

Djokovic took down Philipp Kohlschreiber, Denis Kudla, Hubert Hurkacz, Ugo Humbert, David Goffin and the first-time Wimbledon semi-finalist Roberto Bautista Agut to book the place in the title match, delivering reliable performance in almost every set to join Roger Federer in the most significant encounter of the tournament.

Thus, Novak is through to his 25th Major final, becoming the third player who achieved that after Federer and Rafael Nadal, with the Swiss standing on 31 and the Spaniard on 26, just one more than the Serb. Novak is the sixth player in the Open era with four Grand Slam finals after turning 30, with no intentions of stopping on that number with the US Open and the Australian Open coming in the next half a year.

The 32-year-old has been one of the most consistent players at Majors ever, scoring 276 victories and producing the first notable results back in 2007 when he was the semi-finalist at Roland Garros and Wimbledon and the finalist at the US Open, losing it in three tight sets before going all the way at the Australian Open next January.

Djokovic will have the opportunity to pass Nadal next year if he brings stronger Grand Slam performance than the Spaniard and will have a chance to chase Roger's record in the following years if he maintains the current level. 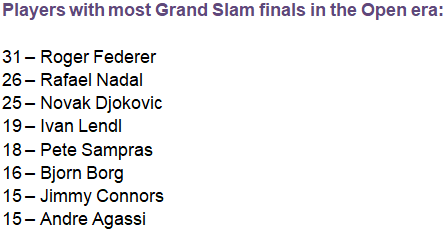