Winning one Major title during a career is a feat that would keep you on the list of tennis immortals for good. To win a single Major five times is an exclusive achievement reserved only for those with extraordinary skills and abilities and to repeat that at another of the most significant tennis events is something that would bring a competitor straight into the tennis pantheon.

Instead of the twelve Olympians, the one would meet Roger Federer, Pete Sampras, Bjorn Borg and Novak Djokovic there, the only four players in the Open era who have won five titles at two different Majors! The great Swede Bjorn Borg was the first to achieve that, conquering six Roland Garros crowns and five at Wimbledon, possessing a great ability to change his game and play on a high level on two completely different surfaces separated by only a couple of weeks.

Pete Sampras was the next to join the party, lifting seven trophies at Wimbledon and five at home Major in New York, delivering that final US Open title in 2002 after a memorable run that led to his retirement, probably the best one in the history of tennis.

Roger Federer is the only player with at least five Major titles at three different tournaments, counting to six in Melbourne following an incredible comeback in 2017 and 2018 and adding five more at the US Open between 2004-2008.

Roger has won eight Wimbledon trophies as well, standing tall at the top of this list and also as a protagonist in the latest story that initiated this story. On Sunday, Novak Djokovic saved two match points against Roger Federer in memorable Wimbledon final that lasted just under five hours, lifting the fifth trophy at the All England Club and becoming the fourth player with five Majors at two events, previously winning seven Australian Opens from as many finals.

Thus, Novak has joined this incredible group of players and should remain the newest player on it for many more years to come if Rafael Nadal doesn't produce something special at the US Open in the next couple of years, standing on three titles in New York at the moment.

Six players in the Open era have won at least five crowns at the same Major and it is highly unlikely to see another one in the next ten or 15 years, as someone has to end the domination of Djokovic, Nadal and Federer first to start his run on the biggest tennis stage. 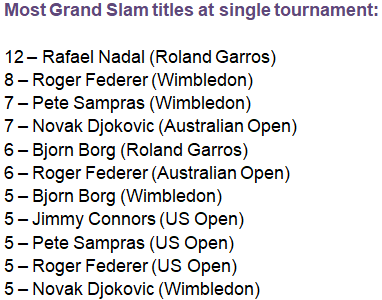