Working on his comeback for the Tokyo Open next week, Novak Djokovic is spending the 270th week on the ATP throne, catching Ivan Lendl on the exclusive list and setting eyes on Pete Sampras and Roger Federer who are the only player left in front of him.

Also, the 16-time Grand Slam champion has become the third player with at least 400 weeks in the top-2, joining Roger Federer and Rafael Nadal on the list that probably won't get the fourth member for many more years!

Besides those 270 weeks as world no. 1, Novak had spent 131 weeks as world no. 2, battling with Roger, Rafa and Andy Murray for more than ten years now and achieving some huge ranking milestones after being one of the most consistent players ever.

Novak became the third-strongest link on the Tour after Wimbledon 2007, improving all the elements of his game and standing as the most serious rival of Federer and Nadal who were still the players to beat in those years.

After the Australian Open 2010, the Serb cracked the top-2 for the first time despite losing in the quarter-final, staying there until May and returning in July and again in September and October to gather more weeks in that group.

As we all know, Novak produced one of the greatest seasons in the Open era in 2011, winning ten titles and 70 out of 76 matches to establish his reign and become world no. 1 for the first time in a career. For more than six years, Novak was the player to beat on the Tour, rattling off one strong season after another to enter the record books and develop into one of the greatest players of all time, capable of playing his best tennis on every surface and every part of the year.

Those 325 weeks in the top-2 between March 2011 and June 2017 stand as the second-best result since 1973, only behind Roger Federer, with the incredible streak coming to its end after Roland Garros when he failed to defend the title.

Struggling with an elbow injury, Novak skipped the second part of 2017 and had problems to find the rhythm in the first months of 2018, dropping out from the top-20 before closing the season as the year-end no. 1, returning into the top-2 in October and staying there ever since to embrace this massive record.

Djokovic and Nadal are the leaders of the pack at the moment, battling for the year-end no. 1 spot in the remaining events of the season, having a huge lead over Roger Federer and the players behind him, with the Serb securing more weeks in the top-2 that would push him closer to Federer who tops the charts with 528 weeks spent in the top-2, just a couple more than Nadal who will pass him soon. 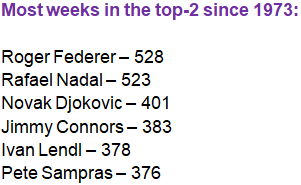