World no. 2 Novak Djokovic has made a perfect start at the ATP Finals in London on Sunday, beating Matteo Berrettini 6-2, 6-1 in just over an hour. Battling with Rafael Nadal for the year-end no. 1 spot, Novak will try to claim the sixth ATP Finals crown and finish the season at the top for the sixth time and add more fuel to his GOAT race against Federer and Nadal.

The Serb needed some time to take the next step and crack the top-50, finding himself in that group after reaching the quarter-final at Roland Garros and never leaving again to secure this massive milestone 13 years later.

Carried by this momentum, the talented youngster claimed two ATP titles in Amersfoort and Metz by the end of the season to finish just outside top-15 at the age of 19. Of course, Novak's place in the elite 50 has never been in doubt after that, becoming world no.

3 in August 2007 and establishing himself as the closest rival of Roger Federer and Rafael Nadal. Improving his fitness, Novak became the player to beat from 2011, earning many notable records that will take some beating in the future and standing as the most consistent player in the previous decade to follow the numbers of Federer and Nadal with incredible persistence.

The winner of 16 Major titles and 34 Masters 1000 crowns will almost certainly stay in the top-50 for many more years, eager to chase all the records as long as he remains healthy and happy on the court, which is undoubtedly the case at the moment.

If he produces another consistent season in 2020, the Spanish veteran Fernando Verdasco should become the third active player with 800 weeks in the top-50 before Novak who will join the list at the end of 2021, seeking more notable achievements in the quest for becoming the best player of all time in front of Federer and Nadal. 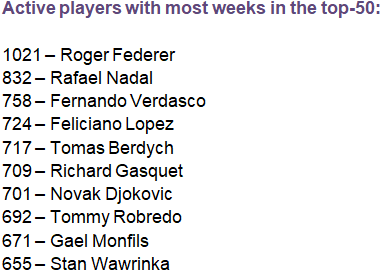 TODAY'S MOST POPULAR
RAFAEL NADAL
'Rafael Nadal and Dominic Thiem should have at least said something,' states..
Novak Djokovic picks Rafael Nadal over Roger Federer, calling him his greatest..
Wolfgang Thiem: 'We are yet to see Rafael Nadal, Novak Djokovic in Adelaide'
'Rafael Nadal's in a class of his own', says Grand Slam champion
'Roger Federer is also a genius off the court', says former Top 5
Novak Djokovic: 'Rafael Nadal, Dominic Thiem and I are fortunate'
'If Roger Federer's fit and ready to play, we will...', says former Top 5
THIS WEEK MOST POPULAR
WTA TENNIS
Venus Williams getting married soon?
Garbine Muguruza: "Roger Federer's proposal will end up in oblivion"
'There was no way Roger Federer could win matches...', says legend
Adele’s “Set Fire to The Rain” featuring Roger Federer and Rafael Nadal
Naomi Osaka's last quarantine post infuriated the fans!
Serena Williams trains with her daughter in Australia!
Serena Williams' daughter shows her two-handed backhand!