Novak Djokovic, Rafael Nadal and Roger Federer have been the dominant force at the Masters 1000 series since 2005, sharing 97 titles combined and collecting records that should stay for good. Due to the coronavirus, this week's Cincinnati event (staged in New York) is the first Masters 1000 event of the season, led by Novak Djokovic as the top seed, with no Rafael Nadal or Roger Federer in the draw.

After a slow start and neck issues, Novak has found the rhythm and has advanced into the eighth semi-final in Cincinnati and the 68th at the Masters 1000 level. Thus, Novak has cemented his position ahead of Roger Federer on the list of players with most Masters 1000 semi-final, leaving the Swiss on 66 and moving five away from Rafael Nadal who tops the standings with 73.

Advancing to at least one Masters 1000 semi-final for the 14th straight season, Novak kicked off the campaign against Ricardas Berankis, struggling with neck issues and getting broken thrice. Despite that, Djokovic scored a 7-6, 6-4 victory after four breaks on his tally, feeling better over the next couple of days and raising his level.

Novak looked much better in the third round, toppling Tennys Sandgren 6-2, 6-4 in an hour and 28 minutes to reach the quarters. Serving better than in the first clash, Novak lost 14 points in nine service games to fend off all four break chances offered to the American, securing three breaks to control the pace and move into the last eight.

There, Novak took down the first-time Masters 1000 quarter-finalist Jan-Lennard Struff 6-3, 6-1 on Wednesday in 62 minutes, earning the 68th Masters 1000 semi-final and remaining on the title course. Everything worked fine for Novak on both serve and return, making the 21st straight victory in 2020 and staying undefeated in this crippled season.

Novak Djokovic is through to his 68th Masters 1000 semi-final in Cincinnati.

Djokovic defended two out of three break chances, suffering the only break at 5-0 in the second set but recovering instantly to seal the deal, stealing almost 60% of the return points and delivering five breaks.

It was the fourth victory for Novak over Jan-Lennard Struff in as many encounters, firing 17 winners and 12 unforced errors and drawing almost 30 mistakes from the German, enough to carry him through. Djokovic had the advantage in the shortest and more extended exchanges, controlling the baseline's pace and choosing perfect timing to attack and rush to the net.

The Serb will face Roberto Bautista Agut in the battle for the final on Friday, seeking the second Cincinnati crown after 2018 and the 35th at the Masters 1000 level overall, the number that currently holds the leader of the pack Rafael Nadal. 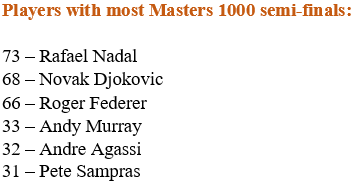