When we talk about the Masters 1000 events on clay, Rafael Nadal is in the league of his own, with 25 titles and more than 180 wins! Novak Djokovic has been his closest rival, conquering nine Masters 1000 crowns on the slowest surface and hoping to grab the tenth this week in Rome, leading the field ahead of the Spaniard.

As we already said, Nadal is far in front of all the rivals at this level on clay, seeking the 183rd victory against Pablo Carreno Busta later on Wednesday. Roger Federer scored 113th victories in Hamburg, Monte Carlo, Rome and Madrid, standing second behind the Spaniard and getting company following Novak Djokovic's second-round win at Foro Italico.

Novak toppled Salvatore Caruso 6-3, 6-2 to join Roger on 113 victories at clay-court Masters 1000 tournaments, with David Ferrer keeping the fourth place with 80. In his first match since the US Open default, Djokovic lost only 11 points in nine service games, never facing a break point and mounting the pressure on the other side of the net.

The Italian couldn't follow that pace, dropping 45% of his games' points and suffering three breaks from eight chances offered to Djokovic to finish his run in the second round. The Italian netted a forehand in the first game, holding at 15 in game two with a service winner to get his name on the scoreboard.

Djokovic struggled a bit in the third game, bringing it home after two deuces, still challenged by Caruso who fired a backhand winner for 2-2.

Novak Djokovic and Roger Federer are tied on 113 Masters 1000 wins on clay.

Novak sprayed two forehand errors in the sixth game to waste break opportunities, holding at 15 with a service winner a few minutes later and delivering a break at 30 following a forehand error from Salvatore that sent him 5-3 up.

Serving for the set, the Serb landed a forehand winner in game nine to clinch it in 39 minutes, controlling the pace and hoping to repeat that in set number two. Caruso landed an ace down the T line at the beginning of the second set, having to work much harder at 1-1 when Djokovic put him under pressure.

Novak earned four break chances, converting the last one with a forehand winner to seal the game after almost 12 minutes, erasing Caruso's four game points. Djokovic confirmed the break and they both held at love in games five and six before Salvatore suffered a break that sent Djokovic 5-2 up.

Serving for the win, world no. 1 produced another comfortable hold, earning the 28th victory of the season and matching Roger Federer's record on clay. 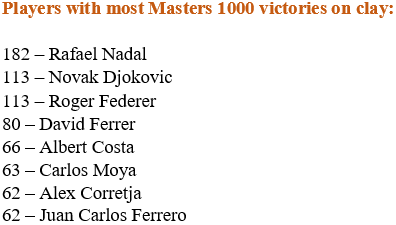