Novak Djokovic had to dig deep on Saturday in Rome, prevailing against Dominik Koepfer to reach the 11th Foro Italico semi-final. The four-time champion is the most consistent player in Rome alongside Rafael Nadal, advancing to his seventh consecutive semi-final in the Italian capital and adding his name to the special list.

Djokovic became the fifth player in the Open era with at least 11 semi-finals at two different ATP tournaments. A year ago, Djokovic advanced to his 11th semi-final at the US Open, waiting for a year to add another event to that list and follow the achievement of Jimmy Connors, Ivan Lendl, Roger Federer and Rafael Nadal.

Roger Federer has seven tournaments with at least 11 semi-finals, followed by Rafael Nadal who stands on five. Novak is slowly catching them with two events with that many semi-finals, battling hard against Filip Krajinovic and Dominik Koepfer to remain on the title course, seeking the 36trh Masters 1000 crown.

Krajinovic kept Novak on the court for more than two hours, giving his best in the opening set for almost an hour and a half! In the end, Djokovic scored a 7-6, 6-4 victory, setting the quarter-final clash against the German qualifier Dominik Koepfer.

Playing his first Masters 1000 tournament, Koepfer delivered his best tennis to reach the quarters, pushing world no. 1 to the limits in a 6-3, 4-6, 6-3 defeat. Novak struggled to cross the finish line first, suffering four breaks and earning six from no less than 21 chances, hitting 24 winners and spraying 38 mistakes.

The last year's finalist held at love with a service winner in the first game, moving 2-0 up after seizing the fourth break chance. Djokovic forced an error from Koepfer in the third game to confirm the advantage, gaining another break following a forehand mistake from the German to race 4-0 ahead.

Out of sudden, Novak lost the edge, landing a backhand beyond the baseline to suffer a break in game five.

Novak Djokovic is the fifth player with 11 semi-finals at two ATP events.

Koepfer saved a break point with a service winner, closing the sixth game when Novak netted a forehand and decreasing the deficit to 4-2.

Djokovic got broken at love in game seven following a loose backhand, bouncing back to steal the rival's serve and open a 5-3 gap. From 30-0 down in the ninth game, Novak took four straight points to clinch the set with a forehand winner.

Dominik fired two service winners to repel break chances and stay in touch. Novak closed the fourth game with a forehand winner, opening a 3-1 lead and controlling things on the court ahead of another comfortable victory. The German had other plans, though, remaining within one break deficit and stealing Novak's serve at love to level the score at 3-3.

After breaking his racquet, the Serb earned code violation and found himself 4-3 down when Koepfer held in game seven with a smash winner. Djokovic leveled the score at 4-4 and created three break chances in the next one, denied by Dominik, who repelled them all and closed the game with an unreturned serve.

Losing focus, Novak placed a forehand beyond the baseline in the tenth game to suffer a break and hand the set to a qualifier. Koepfer erased four break chances at the beginning of the final set to avoid an early setback. Djokovic held at love in the second game and grabbed a much-needed break at 1-1 when Dominik hit a double fault, confirming the advantage with a hold at 15 that moved him 3-1 up.

A perfect drop shot secured the sixth game for the Serb after deuce, landing a forehand down the line winner in game eight to move closer to the finish line. Djokovic converted the second match point on the return a few minutes later with a volley winner at the net to seal the deal and advance into the semis. 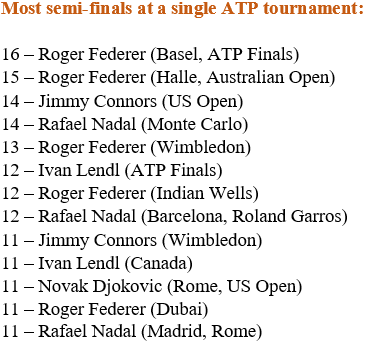