Roger Federer, Rafael Nadal and Novak Djokovic have been the players to beat at the Masters 1000 series, sharing almost every notable record and pushing each other to the limits. All three players have played in mind0blowing 50 finals at this series, leaving the closest rivals far behind and running their race at the top.

On Sunday, Novak Djokovic became the first player with 52 Masters 1000 finals to top the charts, with Rafael Nadal staying on 51 and Roger Federer on 50. Novak defeated Casper Ruud 7-5, 6-3 in the Rome semi-final, advancing to his second Masters 1000 final of the season to pass Nadal.

The encounter lasted for two hours and 11 minutes and Novak had to dig deep in the opener, saving two set points in the tenth game and sealing the deal in the second. Novak defended seven out of eight break chances offered to the youngster, delivering three breaks to emerge at the top after a grueling battle with the first Norwegian in the Masters 1000 semi-final.

Novak hit 37 winners and 19 unforced errors, with Casper challenging him with 26 winners and 29 mistakes, giving his best but missing a chance to win at least a set. The opening set lasted for 70 minutes and was a quality contest, pushing each other to the limits.

Novak had 20 winners and 15 unforced errors, delivering two breaks and beating Ruud in the shortest and most extended exchanges to prevail 7-5. Djokovic forced Casper's mistake in the first game to hold after deuce, with the Norwegian bringing the second game home at love after a forehand winner for a positive start in the biggest match of his career.

Dominating from his more substantial wing, the youngster grabbed a break in the third game when Novak sprayed a backhand error, holding at 30 following a loose forehand from Djokovic to confirm the lead and open a 3-1 gap.

Novak held at love with a service winner to reduce the deficit, creating two break points in the next game that Casper denied and brought the game home after 11 minutes.

Novak Djokovic is the first player with 52 Masters 1000 finals.

They both held at love in games seven and eight to remain within the same distance, with Ruud serving for the set at 5-4.

The youngster wasted two set points when he needed just one solid serve & forehand combo, dropping four straight points to offer a break to Novak and keep world no. 1 in the opener. At 5-5, Djokovic had to work hard to stay on the scoreboard's positive side, defending three break chances for another crucial hold.

Serving to remain in the set, Ruud got broken at 30 following a forehand error, handing the set to Djokovic who gained the momentum. Carried by this boost, Novak held at love at the beginning of the second set before two marathon games on both sides with some ten deuces and five break chances.

The servers saved them all to remain unbroken, with Casper leveling the score at 2-2 after a hold at love. Losing ground for a bit, the Norwegian suffered a break at love in game six that sent Djokovic 4-2 in front, with the Serb firing a service winner to confirm the advantage and open a 5-2 gap.

Returning in game eight, Novak wasted the first match point after a forehand mistake, and the second when Casper hit a brave forehand winner. After five deuces, the youngster held with a service winner, reducing the deficit to 3-5 and hoping for a break that would keep him in.

However, that didn't happen, as Novak held at love with a service winner to wrap up the encounter and set the title clash against Diego Schwartzman. 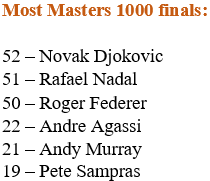