Rafael Nadal and Novak Djokovic have left Roger Federer behind them for good at the top of the Masters 1000 charts. The Serb claimed the 36th title on Monday in Rome while the Spaniard stands on 35, seven more than the Swiss who won his last one in Miami 2019.

Still, the Swiss maestro is miles in front of anyone else when we talk about the age records, playing in 21 Masters 1000 finals after turning 30 and lifting 11 trophies. With those 21 finals after the 30th birthday, Federer is 12 ahead of Rafael Nadal who stands on nine, followed by Andre Agassi and Novak Djokovic, who are on eight.

In 2017, Novak Djokovic competed in Rome final just a day before turning 30, having to wait until Cincinnati 2018 to advance into another one, his first after the 30th birthday. Recovering from that nasty elbow injury, Novak regained his old Masters 1000 magic, entering the eighth title match after turning 30 this Monday and becoming the fourth player with that many finals in this age group after Agassi, Federer and Nadal.

Like in the previous five out of seven finals in his 30s, Novak scored a victory that secured the 36th Masters 1000 trophy for him, leaving Nadal on 35. Djokovic defeated Diego Schwartzman 7-5, 6-3 en route to his fifth trophy in Rome, overcoming a slow start to overpower the Argentine and lift the trophy.

The first-time Masters 1000 finalist Schwartzman showed no signs of nerves in the opening three games, dominating under light rain and opening a 3-0 advantage with a double break. Having to raise his level, Novak started to hit better in the fourth game, converting a break chance after Schwartzman's double fault to get his name on the scoreboard.

Attacking with more accuracy and depth, the Serb held at 15 with an ace, securing another break soon after that to level the score at 3-3. Djokovic held at 15 in game seven, rattling off 16 of the previous 21 points to grab the first lead.

Diego fired a perfect forehand down the line winner at 30-15 in the next one, sealing it with a service winner for 4-4, challenging Novak as was expected.

Novak Djokovic is the fourth player with eight Masters 1000 finals after turning 30.

Djokovic fended off a crucial break point in game nine with a volley winner, landing another for a massive hold and a 5-4 advantage.

Serving to stay in the set, Schwartzman erased a set point with a bold forehand winner, bringing the game home after two deuces and a backhand down the line winner to produce more drama. Novak opened a 6-5 lead after deuce, forcing the rival to serve for staying in the set again.

Pushing strong on the return, Djokovic converted the fourth set point for 7-5 after 70 minutes, gaining a massive boost ahead of set number two, never losing the Masters 1000 final after winning the opener. Starting all over, Diego kicked off the second set with a break at 15, ready to give his best in the most crucial match in a career.

Bouncing back immediately, Djokovic leveled the score at 1-1 when Schwartzman's forehand landed wide, placing a winner at the net for a commanding hold in game three. The Argentine fired four winners in the next one for 2-2, squandering two break chances in the fifth game that would cost him dearly.

Diego held with a reliable drop shot a few minutes later before Djokovic opened a 4-3 lead. Cracking under pressure, Schwartzman sprayed errors in game eight to get broken at love following a backhand down the line winner from Djokovic, who held at 30 to seal the deal and celebrate the 36th Masters 1000 crown. 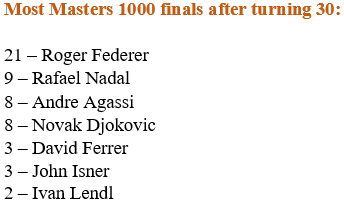 TODAY'S MOST POPULAR
NOVAK DJOKOVIC
Jim Courier: 'Roger Federer, Rafael Nadal have made Novak Djokovic's record even..'
Alexander Zverev's ex-girlfriend expecting baby with German tennis star
'I have nothing against Roger Federer personally, but...', says French star
Roger Federer hits practice court on a Melbourne-like surface
Gilles Simon: Novak Djokovic is stronger than Rafael Nadal, Roger Federer
Denis Shapovalov pulls out of Paris Masters, ends bid for Nitto ATP Finals
'It was an honor to play in the era of Roger Federer, Nadal, Djokovic', says ATP ace
THIS WEEK MOST POPULAR
ROGER FEDERER
'Roger Federer has 20 Grand Slam wins, but Nadal...', says doubles legend
Djokovic: "If I beat Roger Federer's record I ..."
Stan Wawrinka SHOCK: "This is when I will retire!"
Rafael Nadal leaves Bjorn Borg behind to stand alone on Major achievement
'Rafael Nadal does not move like his 20 years', says top coach
Djokovic: 'People will decide who is better between Federer, Nadal and me'
Dominic Thiem: Vienna player field got unreal after Novak Djokovic signed up to play