Novak Djokovic made Roland Garros debut in 2005, retiring in the second round against Guillermo Coria. Fifteen years later, the Serb is one of three players with most Paris matches in the Open era, catching Roger Federer on 87 and trailing 13 to the record-holder Rafael Nadal.

Novak advanced to his 14th quarter-final in Paris, competing in five matches and catching Roger Federer before moving ahead of the Swiss on Friday in his semi-final duel with Stefanos Tsitsipas. Between 1999-2004, Federer played 15 encounters at Roland Garros, adding 52 between 2005-2012 when he claimed one title and lost in the semis or the final six times.

On the other hand, Novak had competed in 39 Roland Garros clashes until 2012, 28 fewer than the great Swiss. In the previous eight years, Djokovic has melted that deficit, reaching the latter stages almost every year and using the fact that Federer had to skip the clay Major in 2016, 2017, 2018 and 2020.

In his 87th match in Paris, Novak beat Carreno Busta 4-6, 6-2, 6-3 6-4 in three hours and ten minutes of a grueling battle, advancing to his tenth Roland Garros semi-final. Djokovic had 53 winners and 41 unforced errors, getting broken three times and delivering six breaks to overcome a slow start and overpower the rival and the injury.

Carreno Busta drew first blood at 2-2 following a loose forehand from the Serb who was far from his best. Djokovic pulled the break back when Pablo hit a double fault to level the score. The Serb wasted a game point at 4-4 and got broken after losing a battle of backhands, allowing Carreno Busta to seal the set with a forehand down the line winner for 6-4 in 48 minutes.

Djokovic recovered his strokes in set number two after medical timeouts, hitting 13 winners and seven unforced errors to gain control. The Spaniard wasted two break opportunities in game three and got broken in the next one, losing the edge he had in the opener.

The Serb survived another break point to open a 4-1 gap, sealing the set with a break at love thanks to a return winner at 5-2. Pablo couldn't convert his opportunities at 1-1 in set number three, suffering a break in the next one when Novak placed a drop shot winner for an early lead.

Carreno Busta bounced back with a break at 15 at 1-3 thanks to a forehand winner, eager to give his best against the world's leading player. Novak saved a crucial break point at 3-3 to remain in front, broke Pablo in the next one and closed the set with a hold at love at 5-3 to open two sets to one advantage.

Battling hard for every point, Carreno Busta repelled the first five break chances at 1-1 and 2-2 in set number four before a terrible forehand mistake at the net at 3-3 that pushed Djokovic in front. Serving in game eight, Novak remained focused and repelled three break points to open a 5-3 gap, forcing Pablo to serve for staying in the match.

The Spaniard closed the ninth game with a service winner, reducing the deficit before Novak moved over the top with a forehand winner at 5-4, setting the 88th Roland Garros encounter with Stefanos Tsitsipas. 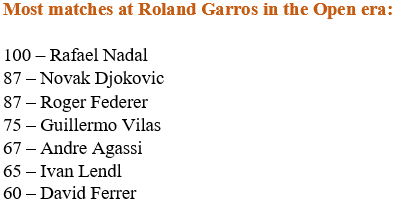