Seeking the sixth ATP Finals crown and the first since 2015, world no. 1 Novak Djokovic made a winning start in London. The Serb ousted a debutant Diego Schwartzman 6-3, 6-2 in an hour and 18 minutes, earning the 37th ATP Finals triumph and leaving his former coach Boris Becker on 36.

After a slow start, Novak settled into an excellent rhythm and overpowered the opponent, finishing the encounter with 26 winners and 14 unforced errors. Djokovic had the advantage in the shortest rallies up to four strokes despite not hitting that many service winners, taking 14 points more than Schwartzman in the extended exchanges to seal the deal in style and add 200 points to his ranking tally.

The Serb stood strong behind the initial shot and from the baseline, controlling the rallies' pace and overwhelming the Argentine with deep and precise groundstrokes. Djokovic lost serve once in the early stages and grabbed four breaks in the rest of the clash to remain in front and sail over the finish line.

Novak held at love in the first game after two aces at 30-0 before the Argentine got his name on the scoreboard when the Serb landed a backhand long. Djokovic needed some time to find his strokes, spraying some errors and netting a forehand to offer two break chances to Schwartzman in game three.

Diego forced a mistake from Novak at the net to confirm the second and open a 3-1 lead, making a steady start against the five-time champion in his first London appearance. Novak won a battle of forehands in game four to pull the break back and level the score at 2-2, holding at love to regain the advantage and never looking back.

Diego landed two winners at 30-30 in game six to remain on the positive side, hoping for more return chances against a superior indoor player. Novak landed a forehand down the line winner at 3-3 and fired another direct point from his right wing to seize the second break and open a 5-3 gap.

The Serb wrapped up the opener with a service winner in game nine after 40 minutes, hoping for more of the same in set number two. Schwartzman squandered a game chance in the opener's eighth game before losing serve, repeating that in the first game of the second set and experiencing a break following Djokovic's smash winner.

Novak confirmed the lead with three winners in game two, looking better and better and having the finish line clearly in his sight. Diego reduced the deficit to 1-2 with an ace before Novak forged a 3-1 advantage when his rival netted a routine backhand.

With no open space for storing his strokes, Schwartzman gave serve away for the second time in game five, pushing Djokovic 4-1 ahead and closer to the finish line. With nothing to stop him, Novak held at 15 with a service winner and forced Diego to serve for staying in the match.

The Argentine hit a service winner to bring the seventh game home and extend his chances before the Serb held with a volley winner a few minutes later to move over the top and secure the 37th victory at this event. 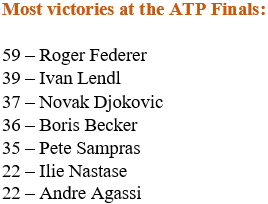