Despite some setbacks, Novak Djokovic embraced another successful season in 2020, topping the standings for the sixth time to join Pete Sampras as a record holder. Djokovic passed Rafael Nadal at the Australian Open and never looked back, keeping the ATP throne firmly in his hands and achieving many ranking records.

At 33 and seven months, Novak is the oldest year-end no. 1 player since the start of the ranking in 1973, also securing his ninth year-end top-2 finish. Thus, the Serb has joined the exclusive list of players who have accomplished that feat, catching Jimmy Connors and trailing two behind Roger Federer and three behind Rafael Nadal.

Djokovic has been the dominant figure in men's tennis in the previous decade, performing the year-end no. 2 feat nine times in the last ten years, missing it only in 2017 after that severe elbow injury. Following a remarkable comeback, Novak returned to his best in 2018 and has stayed there ever since, like Rafael Nadal.

In ten of the previous 11 seasons, Rafa or Novak have stood as the year-end no. 1 players, preparing another battle for 2021. Djokovic was the most consistent player of the reduced 2020 season, passing Nadal on the ATP throne after Melbourne and never looking back.

The Serb melted the deficit with a brilliant ATP Cup run, scoring six singles victories and beating Rafa in the final to help Serbia win the inaugural title. At the Australian Open, Novak lifted the eighth trophy following a tight five-setter triumph over Dominic Thiem and claimed another Dubai title before the coronavirus halted the season until August.

Continuing where he left in the opening two months, Novak won the 35th Masters 1000 title in Cincinnati, still undefeated this season ahead of the US Open. Novak's first mistake came in New York, getting defaulted after hitting the lineswoman with a ball, missing the opportunity of chasing the 18th Major crown and returning to Europe.

The Serb won the 36th Masters 1000 title in Rome to move in front of Rafael Nadal, who bounced back at Roland Garros, toppling the Serb in straight sets in the title match.

Entering Vienna to secure the record-tying sixth year-end no. 1 honor, Novak reached the quarter-final and lost to Lorenzo Sonego, winning only three games in the toughest loss he has ever experienced on the ATP Tour! Djokovic decided to skip Paris, preparing for the ATP Finals, where he lost an epic semi-final battle against Dominic Thiem, wasting a 4-0 advantage in the deciding tie break.

Novak is safe in front of the Spaniard and the Austrian at the moment, looking good to pass Roger Federer's record of 310 weeks as world no. 1 in March. 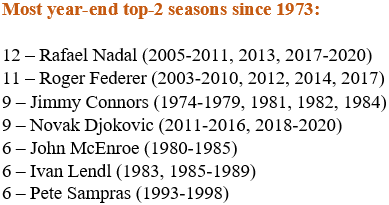