Novak Djokovic won his first five-setter at Majors on his Wimbledon debut in 2005, coming from two sets to love down against Guillermo Garcia-Lopez in a 3-6, 3-6, 7-6, 7-6, 6-4 triumph in four hours and eight minutes. Knows as one of the biggest gladiators in the world of tennis, Novak has always given his best, battling for every point and refusing to surrender in many challenging encounters.

On Friday, Novak claimed the milestone 30th five-setter victory at Majors, passing Pete Sampras and joining Roger Federer at the top of the charts. Novak had to deal with the rival on the other side of the net and an injury, overcoming both to achieve a massive milestone.

The Serb defeated Taylor Fritz 7-6, 6-4, 3-6, 4-6, 6-2 in three hours and 25 minutes, starting all over in the decider despite a torn muscle and earning his 30th five-setter triumph on the biggest scene. The young American gave his best to challenge the world's leading player and stay competitive, bouncing back from 5-2 down in the opening set to reach a tie break and suffering only one break in set number two.

Despite that, Novak claimed both sets to forge a massive advantage, looking good to seal the deal in straight sets and score another comfortable victory at his beloved Rod Laver Arena.

His plans could have crashed in a moment following a nasty muscle injury after one slide at the beginning of the third set.

Djokovic lost strength in his strokes, and Fritz took advantage of that, claiming the next two sets to force a decider and standing a chance to topple Novak and earn his career-best victory. Instead of that, the Serb somehow recovered his strokes at the beginning of the fourth set, losing it but raising his level to give his fans hope ahead of the decider.

Fritz couldn't match that pace and failed to impose his shots, losing ground in the decider to send Djokovic over the top with a double break. Novak didn't train on Saturday, and we will have to wait until Sunday night to see if he would recover enough to challenge Raonic. 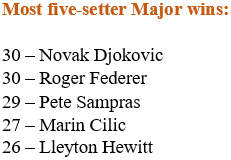