World no. 1 Novak Djokovic scored his 18th victory of the season at the home ATP 250 Belgrade 2 event to reach the semi-final and remain on the title course. Novak stormed over Federico Coria 6-1, 6-0 in 55 minutes, dominating from start to finish to move over the top in style and secure his 952nd ATP victory.

Thus, Novak became the fifth player with that many triumphs in the Open era, leaving Guillermo Vilas on 951. The Serb now trails only to Jimmy Connors, Roger Federer, Ivan Lendl and Rafael Nadal, who have all scored over 1000 ATP victories.

Djokovic's first ATP win came in the Davis Cup in 2004 at 16, and he became one of the world's best players only a couple of years later. Standing as the most dominant competitor of the previous decade, Novak has produced some incredible seasons and passed numerous rivals on the list with most ATP wins, entering the top-5 ahead of Roland Garros and setting eyes on the opponents ahead of him.

Novak didn't have to work hard to secure that milestone 952nd win, staying on the court for under an hour against Coria and preserving energy for the following encounters. Djokovic lost eight points behind the initial shot against Federico, suffering one break and stealing the rival's serve six times to race over the top in one of his best performances in 2021.

Djokovic held at 15 with a service winner in the opening game and scored a break after a short forehand crosscourt winner in the next one, previously fending off Coria's four game points. The Serb confirmed the advantage with a hold at 15 and secured another break for a 4-0 lead.

Novak Djokovic is the fifth player with 952 ATP wins in the Open era.

Out of a sudden, Federico showed his skills in game five to clinch a break at love with a forehand winner at the net to avoid a bagel. The Argentine couldn't keep that level for too long, though, sprayed a backhand mistake in the sixth game and allowing Novak to seal the opener with a perfect volley winner a few minutes later.

World no. 1 grabbed a break at the beginning of the second set with a smash winner and held at love with an ace to confirm the advantage. Coria sprayed a backhand error to find himself 3-0 down before Djokovic landed a forehand winner that pushed him further in front.

Federico lost serve in game five following a double fault, and Novak moved over the top with a service winner a few minutes later for a place in the semis. 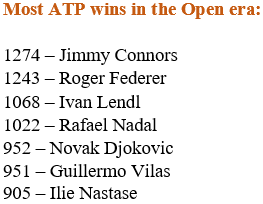