Roger Federer, Rafael Nadal and Novak Djokovic have won 58 Major titles since Wimbledon 2003, pushing each other to the limits for over 15 years and standing way above all the other notable Open era players. In a rare feast of tennis, the three legends were all in action on Thursday at Roland Garros, battling in the second round and trying to win a couple of more matches before facing each other since the quarter-final round.

Roger, Rafa and Novak have played 1001 Major matches so far, setting many records that will never be broken. Federer leads the charts with 423 Major encounters since 1999, staying competitive for over two decades and advancing into the third round with a win over Marin Cilic in four sets.

Novak Djokovic stands second behind Roger, celebrating the 350th Major match as the second player in the Open era! An 18-time Major winner made a debut on the big scene at the Australian Open 2005, losing to Marat Safin and becoming one of the players to beat a couple of years later.

Since 2011, Novak has been the most consistent player at Majors, claiming 17 titles and entering the GOAT race with Roger and Rafa, who were miles ahead of him before the mentioned year. Novak played on a high level in the second Roland Garros match, beating Pablo Cuevas 6-3, 6-2, 6-4 in two hours and six minutes.

The Serb advanced into the third round for the 16th consecutive year in Paris, firing 32 winners and 22 unforced errors to control the pace against the rival who gave his best and still finished empty-handed.

Cuevas created nine break chances and converted one of those at the beginning of the clash, getting broken five times to end his journey in the second round despite a solid effort. They traded breaks in games three and four, and Novak claimed the last three games from 3-3 to seal the opener with an ace down the T line in game nine.

Djokovic stood miles in front in set number two, losing only four points behind the initial shot and producing breaks in games one and five to forge a 4-1 lead. World no. 1 held at 15 in game eight with a service winner for a 6-3, 6-2 lead after swift 70 minutes, looking good to seal the deal in the third.

Pablo netted a backhand in the third set's first game, and Novak defended four break chances in games two and four to remain in front. The Serb held at 15 at 4-3, and Cuevas stayed in contention with another fine hold, serving well after that break he suffered.

Serving for the victory at 5-4, Djokovic held at love with an ace to seal the deal and advance into the third round, happy with how he performed in the 350th match at Majors. 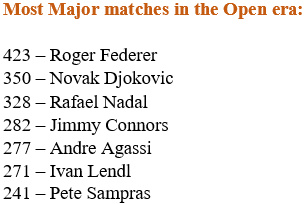