Since the start of the Open era, only four players have scored at least 80 victories at a single Major, with no one looking good to join them in the years to come. Rafael Nadal, Roger Federer, Jimmy Connors and Novak Djokovic are the members of the exclusive group, with the Spaniard leading the pack with 105 triumphs at Roland Garros.

Roger Federer is the only player with at least 100 victories at two Majors, followed by Connors, who scored 98 wins at the US Open and 84 at Wimbledon. Novak Djokovic joined the party in February at the Australian Open, lifting the ninth trophy at Melbourne Park and celebrating 82 victories at the season's opening Major.

Last week in Paris, Novak claimed the 19th Major trophy, moving closer to Roger Federer and Rafael Nadal and becoming the third player in the Open era with at least 80 wins at a single Major after Connors and Federer.

Novak Djokovic is the third player with 80 wins at two Majors.

Novak came to Paris determined to seek the second Roland Garros crown, although it wasn't an easy task after he drew Rafael Nadal in the semis.

In the last 16, the Serb trailed two sets to love against the young Italian Lorenzo Musetti before starting all over in the third and leaving the rival far behind to advance into the quarters. Then, Novak had to battle against another Italian Matteo Berrettini and beat him in four tight sets after three and a half hours to set Rafael Nadal clash.

Fighting for the 58th time since Roland Garros 15 years ago, Djokovic scored his second Roland Garros triumph over Nadal, prevailing 3-6, 6-3, 7-6, 6-2 after over four hours to find himself in the sixth final in Paris. Rafa made a perfect start but lost ground after that, wasting a set point in the third set and having nothing more left in the tank in the fourth to experience his third Parisian loss and propel Novak towards the 80th Roland Garros win.

In the title clash, Djokovic had to perform another impressive comeback against Stefanos Tsitsipas, beating the Greek 6-7, 2-6, 6-3, 6-2, 6-4 in four hours and 11 minutes. Thus, the Serb secured the trophy and wrote history books as the first player in the Open era with two titles at all four Majors. 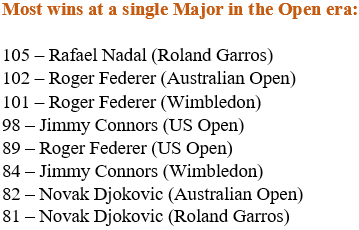 Novak Djokovic weighs in on possibility of Wimbledon losing ranking status
Feliciano Lopez responds to Alexander Zverev, Novak Djokovic criticism
Rennae Stubbs: Carlos Alcaraz movement is equivalent to one of prime Novak Djokovic
Stefanos Tsitsipas idenfities why he lost 2021 French Open final to Novak Djokovic
TODAY'S MOST POPULAR
RAFAEL NADAL
Rafael Nadal: 'I am in a little bit of a rush'
Rafael Nadal returns to practice court ahead of Roland Garros
'We know that's going to be a present problem for Rafael Nadal', says expert
Petar Popovic: "Novak Djokovic made a mistake against Carlos Alcaraz, because .."
'Every ball is hit like Rafael Nadal's life depends on it', says top coach
'Rafael Nadal gets a chance now to regroup', says former ATP ace
Stefanos Tsitsipas compares Novak Djokovic to Formula 1 car
Alex Molcan reacts to beating 'legend' Jo-Wilfried Tsonga
LIV reacted to criticism of Greg Norman
Ons Jabeur opens on how she feels about Iga Swiatek as new face of WTA Tour
THIS WEEK MOST POPULAR
GOLF
Woody Austin was annoyed by Tiger Woods
Emma Raducanu: "I could skip the Roland Garros if..."
Venus Williams took a public bus to go to F1 Miami GP!
Novak Djokovic weighs in on possibility of Wimbledon losing ranking status
Greg Norman raises with another two billion
Alexander Zverev opens on his relationship with Stefanos Tsitsipas
'Roger Federer seriously believes in his...', says former ATP ace
Rafael Nadal: 'I think will not be good if I give...'
When Rafael Nadal received a three-meter tall statue at Roland Garros
Paul Annacone warns Rafael Nadal doubters: He has 13 French Opens for a reason