Bernard Tomic is off to a flying start in Miami, toppling a qualifier Thiago Monteiro 6-4, 6-1 in 65 minutes for his 31st Masters 1000 victory and the first since Cincinnati 2016 when he was the quarter-finalist! The Aussie dominated with the first serve and he fended off six out of seven break points to keep the pressure on Monteiro who couldn't endure it, facing five break chances and getting broken four times to end his run in the opening round.

Tomic kicked off the match with an early break, opening a 5-2 lead before Monteiro bounced back, saving a set point in game nine to reduce the deficit before losing serve again a few minutes later to hand the opener to his opponent.

Bernard was the only player on the court in set number two, scoring breaks in games two and four to control the scoreboard and saving four break points at 5-1 to seal the deal and book the place in the second round where he will face the world no.

1 Novak Djokovic. The German Maximilian Marterer grabbed the fourth Masters 1000 win following a 6-4, 3-6, 6-3 triumph over Taylor Fritz in an hour and 44 minutes. Marterer played better in the crucial moments, saving three out of four break points and converting both chances he created on the return to emerging at the top, securing the pivotal break in the fourth game of the deciding set and sealing the deal with a hold at love at 5-3.

The struggling Spaniard Albert Ramos-Vinolas grabbed one of his best wins in recent months, ousting Marius Copil 6-4, 6-2 in an hour and 17 minutes for the 45th Masters 1000 victory overall. Albert lost serve once and erased that deficit easily with four breaks on his tally to march into the second round.

A qualifier Lorenzo Sonego secured the second Masters 1000 win after a rock-solid performance over Martin Klizan, prevailing 6-4, 6-3 in an hour and 37 minutes and losing just 16 points in ten service games to mount all the pressure on the other side of the net.

The Slovak had to play against 18 break points and he suffered three breaks to push the Italian over the finish line. In the battle of the qualifiers and the NextGen stars, Felix Auger-Aliassime defeated Casper Ruud 3-6, 6-1, 6-2, having the upper hand in sets two and three for already the fifth Masters 1000 victory.

Felix gave serve away three times but his win was never in danger once he found the rhythm after the opening set, creating 13 break chances and converting six for the place in the second round. Following two good holds on both sides, the youngsters traded four breaks to stay locked up at 3-3 before Casper notched another one with a backhand winner in game eight, opening the lead and closing the set after saving four break points in the ninth game.

The Canadian bounced back with an early break in set number two, extending the lead when Ruud netted a forehand in game six and sealing the set with a service winner a few minutes later to gain the momentum before the decider.

There, he was the only player on the court, serving well and breaking the Norwegian at 15 in game three to continue his run before grabbing another break at 4-2 when Casper hit a double fault. Serving for the match, Auger-Aliassime blasted four winners to wrap up the win in style and set the second round clash against the 29th seed Marton Fucsovics.

Robin Haase was too strong for Lukas Lacko while Jeremy Chardy ousted Nicolas Jarry 6-7, 6-2, 7-6 in two and a half hours, prevailing 7-5 in the deciding tie break to make the winning start. Two players born in 1997, Alexander Bublik and Jaume Munar cemented the first Masters 1000 victories while Joao Sousa took down the 17-year-old Chun Hsin Tseng 6-4, 7-5 in an hour and 51 minutes.

The youngest player in the draw fought well and wasted two set points in set number two, staying on the court for almost two hours in his Masters 1000 debut. 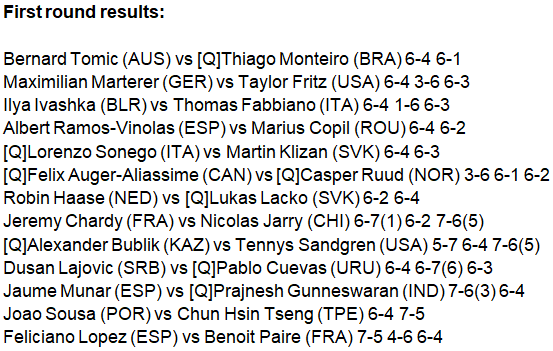