Stan Wawrinka, Monte Carlo champion from 2014, has scored the 146th Masters 1000 win on Sunday after a 7-5, 6-3 win over the struggling Frenchman Lucas Pouille in an hour and 15 minutes. This was their first meeting on the Tour and the Swiss turned the encounter into his favor after winning seven straight games from 5-3 down in the opener, taking control and bringing the match home from there.

After a promising start, Lucas lost the ground and finished the match with 12 winners and 32 unforced errors, unable to match Stan's numbers in the shortest and mid-range rallies to send a former champion into the second round.

Pouille drew first blood in the third game when he broke with a forehand winner, dropping just three points on serve in the first four service games to open a 5-3 gap. That all changed in game ten when he hit a double fault to lose serve at love, bringing Stan back into contention and suffering another break in game 12 to hand the opener to the Swiss following a weak drop shot.

Wawrinka saved all three break points in the fifth game of set number two, breaking Lucas in game two and creating two match points on the return at 5-2. Pouille fended them off but it was too late for any comeback, with Stan sealing the deal thanks to a volley winner in game nine for the place in the second round.

Dealing with a shoulder injury in the last couple of months, Grigor Dimitrov took down Matteo Berrettini 7-5, 6-4 in an hour and 53 minutes for the 83rd Masters 1000 win and only the seventh overall in 2019. The Bulgarian had the upper hand in the mid-range rallies, defending six out of eight break points and creating 18 opportunities on the return, converting four to forge the win in straight sets.

The Italian broke in the opening game of the match after an impressive defense, losing advantage at 2-1 and facing four more break points in the eighth game. He managed to defend them and also to save a set point at 4-5, going 7-5 down after 65 minutes following a double fault that earned the break for Grigor in the 12th game.

The rivals traded breaks at the beginning of the second set and Grigor saved a crucial break point at 4-4 with a forehand drive volley winner, breaking Matteo in the next game to seal the deal and open the campaign with a win.

The 9th seed Borna Coric toppled Hubert Hurkacz 6-4, 5-7, 7-5 in two hours and 52 minutes after more than 100 unforced errors on both sides! Due to rain, they needed five hours to complete the clash and it was Borna who performed better in the end, scoring four breaks and saving four out of seven break points he faced to move over the top and notch the 42nd Masters 1000 victory.

The opening set saw nine easy holds and one break for Borna at 2-2 when the Pole sprayed a forehand error. Serving for the set at 5-4, Borna landed a smash winner to secure the first part of the match, with 11 break points up for grabs in set number two.

Hubert claimed a break in the sixth game but failed to close the set on the first try, losing serve at 5-3 following a wild forehand and keeping Borna in contention. The Croat couldn't deliver a tie break, though, sending a backhand long in the 12th game to hand the set to the Pole before breaking at the start of the decider, stepping down from the court for two hours due to rain shortly after.

There was a small delay in the tenth game as well while Borna served for the match and that took the focus off from him, netting a forehand to bring Hubert back to 5-5 and extend the drama. Hurkacz's efforts were in vain, though, making another forehand error in the next game and allowing Borna to cross the finish line with a hold at 15 for a 7-5 and the place in round two. 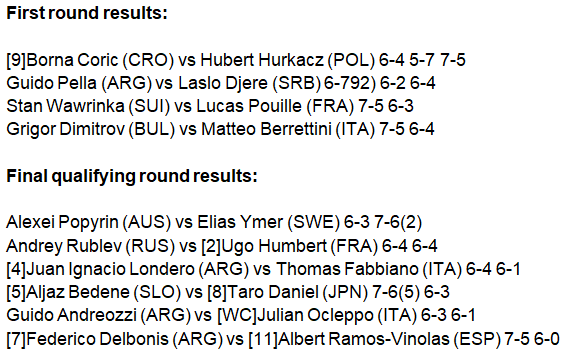