After terrible weather on Monday that allowed only two matches to be completed, Tuesday's schedule saw ten first round encounters that brought some exciting tennis. Juan Ignacio Londero defeated Maximilian Marterer 6-2, 4-6, 6-2 in an hour and 34 minutes, losing serve twice and controlling the pace of the scoreboard with five breaks of serve from 11 chances, dominating in the deciding set to move into the second round.

Christian Garin grabbed already the 15th win in 2019, beating Yannick Maden 6-4, 6-2 in an hour and 17 minutes. Losing 16 points in nine service games, the young Chilean fended off four out of five break points and had the upper hand on the return with four breaks from seven chances, rattling off the last five games of the match to march towards the last 16.

The 6th seed Diego Schwartzman ousted Benoit Paire in one of the most anticipated clashes of the first round, scoring a 6-4, 1-6, 6-1 win after a one-sided decider. Paire has been playing some great tennis on clay this spring and he gave his best in the opening two sets, gathering the momentum with an excellent performance in set number two before suffering three breaks of serve in the final set to propel Schwartzman through.

Martin Klizan needed two hours and one minute to dismiss Ernests Gulbis 6-3, 7-5, with both players creating nine break chances. The Slovak repelled seven of those, kicking off the action in great style and quickly overcoming a break deficit in set number two before saving three break points at 5-5 and sealing the deal with a break in the next game for the seventh victory of the season.

A qualifier Thiago Monteiro delivered a fantastic performance against Jan-Lennard Struff, celebrating a 6-1, 6-1 win in just 51 minutes, certainly one of his career-best so far. The Brazilian lost only seven points on serve and was equally good on the return as well, stealing almost 60% of the return points to claim five breaks and race into the next round.

The 7th seed and one of the title favorites Guido Pella notched the 20th win so far in 2019, toppling Mischa Zverev 6-2, 6-1 in 53 minutes, saving all three break points and breaking the struggling rival five times from six chances to cross the finish line in style and save energy for the next encounters.

One of the most successful players at BMW Open Philipp Kohlschreiber defeated Andreas Seppi 6-2, 7-5 while Budapest champion Matteo Berrettini made a winning start with a 7-6, 6-3 triumph over Denis Istomin. Kyle Edmund has won just five matches so far this year and he will not move from that number in Munich, losing 6-4, 6-3 to Denis Kudla in 67 minutes after a terrible performance on the return, taking just five points behind the American's initial shot.

On the other hand, Denis managed to tame rival's serve and create ten break chances, converting three to control the scoreboard and earn the fourth win in 2019. An 18-year-old Rudolf Molleker took down Marius Copil 7-6, 4-6, 6-4 in two hours and two minutes, surviving 17 aces from the Romanian who saved eight out of ten break points.

That wasn't enough for a more favorable result, though, with Rudolf offering only two break chances and prevailing with a break in the seventh game of the decider. 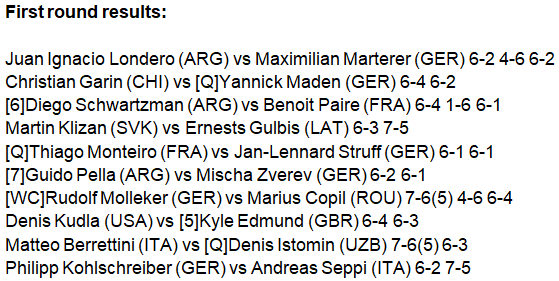