An 18-year-old Felix Auger-Aliassime has claimed the 17th triumph in 2019 and the 11th at Masters 1000 series overall (the youngest player with that many wins), beating the fellow Canadian Denis Shapovalov 6-2, 7-6 in an hour and 49 minutes.

It wasn't the best match we could have got, with more unforced errors than winners, and it was Felix who managed to tame his shots more effectively, hitting a lot of service winners and forging the gap in the shortest range up to four strokes.

The younger Canadian saved two out of three break points and Denis couldn't stay on that pace, suffering three breaks from nine chance given to Felix for the fourth straight loss, the third on clay after Monte Carlo and Barcelona.

Shapovalov saved two break points in the first game of the match to avoid an early setback before another loose service game that pushed Auger-Aliassime 2-1 up when Denis' forehand landed long. Felix broke again in game seven with a deep return and sealed the opener with a service winner a few minutes later for a commanding lead and one step closer to the finish line.

The second set was more competitive, with back-to-back-breaks in games five and six before a tie break where Auger-Aliassime converted the fourth match point at 8-7 after a huge forehand mistake from Denis to book the place in the second round against world no.

2 Rafael Nadal. The German Jan-Lennard Struff secured the 19th Masters 1000 victory after a 7-6, 6-4 win over Nick Kyrgios in swift 65 minutes, losing just eight points on serve in the entire match! Nick drew one break of serve from that and needed more for a positive result, giving serve away twice and producing his usual show on the court that kept the crowd entertained on Court 1 at Caja Magica.

Firing 37 winners and just ten unforced errors, Struff controlled the pace in the points and had a clear advantage in the shortest and mid-range rallies to leave Kyrgios behind and move into the second round. Despite a tie break, the opening set lasted only 37 minutes and Struff grabbed it 6-4 after a backhand error from Nick, building the confidence before set number two.

There, Kyrgios broke in the opening game to seize the lead, keeping it until game four when Jan-Lennard broke back at love with a volley winner to level the score at 2-2 and gain the momentum before the rest of the set. Serving to stay in the match at 4-5, Nick got broken at 15 following a volley winner from the German who will now face Marin Cilic or Martin Klizan.

In the qualifying round, Pierre-Hugues Herbert ousted Robin Haase 5-7, 6-3, 7-6, overcoming a 5-2 deficit in the deciding set and saving two match points on the return at 3-5 before prevailing 7-5 in the tie break to find himself in the main draw.

Casper Ruud led 6-2, 5-2 against the struggling Spaniard Albert Ramos-Vinolas and wasting a match point in the tenth game of the second set in a 2-6, 7-6, 6-1 loss, missing a great chance to compete in the main draw. Hubert Hurkacz defeated Roberto Carballes Baena while Reilly Opelka and Taylor Fritz toppled Juan Ignacio Londero and Marius Copil to join the main action as well. 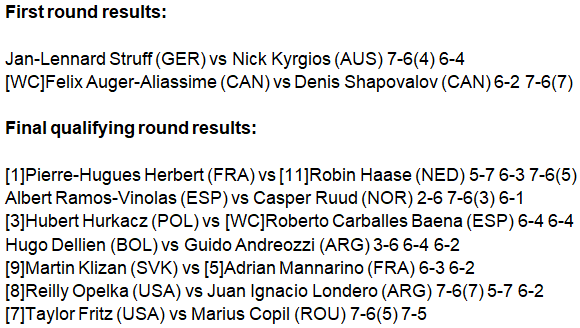