The 22-year-old Tommy Paul is through to the second round at the ATP tournament for the first time since August last year, defeating Denis Kudla 6-0, 6-4 in 57 minutes. It was a rock-solid performance from Paul, dropping 12 points on serve and facing one break point.

Kudla converted it but it wasn't enough to keep him in contention, losing 60% of the points in his games and suffering five breaks to propel Tommy through. Hitting 24 winners and 11 unforced errors, Paul had the upper hand all the time, delivering a bagel in the opening set in some 18 minutes after a forehand winner at 5-0, moving 4-2 in front in set number two following two break points saved in game six.

Kudla broke back at 3-4 with his best return game, only to suffer a break at love in game ten when Paul landed a backhand down the line winner for the best possible start of the event. Another player born in 1997, Marc Polmans earned the first ATP win with a 6-2, 6-4 triumph over Malek Jaziri, saving four out of five break points and taking almost half of the return points to take away Malek's serve four times from 13 chances.

The Aussie broke three times in the opener and repelled four opportunities for Jaziri in the eighth game of the second set, moving in front in the next game and sealing the deal with a hold at 30 in game ten for the place in the second round.

The coeval of Paul and Polmans, Hubert Hurkacz is another player who had a great day at the office, ousting Donald Young 6-1, 6-4 in 63 minutes for the 16th win of the season. The Pole erased six out of seven break points to limit the damage in his games, stealing half of the return points to notch four breaks, the most important one at 2-2 in set number two that pushed him in front.

Young saved a match point at 3-5 before Hubert wrapped up the win with a hold a few minutes later. Alexander Bublik took down Bradley Klahn 7-6, 6-3 in an hour and 27 minutes, getting broken once in set number two and raising the level in the remaining game to march on in straight sets.

Klahn squandered three set points on the return in games ten and 12 of the opening set, losing tight tie break and not being able to keep an early lead from the second set. In the most exciting clash of the day, Bjorn Fratangelo prevailed against Ivo Karlovic 6-4, 6-7, 7-6 after two hours and 32 minutes, staying unbroken and taking one point more than Ivo who led 5-2 in the deciding tie break.

The veteran and a former finalist here blasted 31 aces, fending off no less than five match points in the second set tie break before taking it 16-14 after a forced error from Bjorn. Nothing could have separated them in the final set and Fratangelo came from 5-2 down to win five straight points and move over the top with a forehand winner in the 12th point to celebrate the second win in 2019.

Jo-Wilfried Tsonga needed an hour and 28 minutes to dismiss Brayden Schnur 6-4, 7-6, firing 18 aces and blasting 35 winners with 13 unforced errors to leave the rival behind despite a strong effort from the Canadian. Brayden saved three out of four break points and stayed in touch in set number two before Jo-Wilfried grabbed the tie break 7-2 for a convincing start. 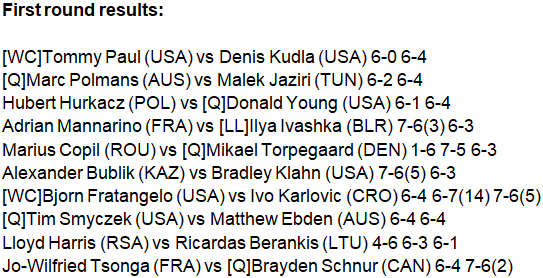