The 5th seed and one of the dark horses in Melbourne Dominic Thiem is through to the second round, beating Adrian Mannarino 6-3, 7-5, 6-2 in two hours and 21 minutes. Fending off six out of seven break chances, the Austrian kept the pressure on the other side of the net and delivered five breaks from ten chances to control the scoreboard and seal the deal in straight sets.

Thiem had the upper hand with 36 winners and 34 unforced errors, never chasing the result and looking much better than at the ATP Cup. Dominic served well in the opening set, earning a break in the fourth game and closing the set with a hold in game nine.

The Austrian opened a 4-2 advantage in the second set but this time he had to work harder to grab it, as Mannarino broke back in the eighth game to level the score at 4-4. Trailing 5-4, Thiem rattled off 12 of the last 14 points, stealing the set 7-5 and continuing in the same style at the beginning of the third set to forge the lead and bring the encounter home after saving break points at 5-2.

The 16th seed Karen Khachanov struggled a little bit in a 4-6, 6-4, 7-6, 6-3 win over a qualifier Mario Vilella Martinez in two hours and 50 minutes. The Russian suffered only one break from two opportunities given to the Spaniard, dominating on the court with 59 winners and 46 unforced errors and managing to seal the triumph without having to play a decider against the rival who gave his best to stay in touch all the time.

Producing one big hold after another, Vilella Martinez clinched the opening set with a break in game ten, staying in touch in the third as well before Karen won it in the tie break, earning momentum and barely losing a point on serve in the fourth to take the last three games at 3-3 and make a winning start.

The 32nd seed Milos Raonic needed an hour and 27 minutes to dismiss Lorenzo Giustino 6-2, 6-1, 6-3, dropping only nine points on serve and never facing a break point to mount the pressure on the Italian. On the other hand, Giustino lost 45% of the points in his games, giving Milos 14 break chances and suffering six breaks to propel the Canadian into the second round.

An 18-year-old Jannik Sinner made a great start on the Australian Open debut beating Max Purcell 7-6, 6-2, 6-4 in two hours and 19 minutes. The Italian prevailed in a tight opening set and scored five breaks in total to keep the points on his racquet in sets two and three for his first Grand Slam victory.

The 12th seed Fabio Fognini survived 35 aces from Reilly Opelka in a 3-6, 6-7, 6-4, 6-3, 7-6 win after three hours and 38 minutes, performing a marvelous comeback and crossing the finish line first after taking the deciding match tie break 10-5.

The 14th seed Diego Schwartzman took down tired Lloyd Harris 6-4, 6-2, 6-2 in an hour and 45 minutes, losing serve once and taking six return games to finish the job in style and advance into the second round. 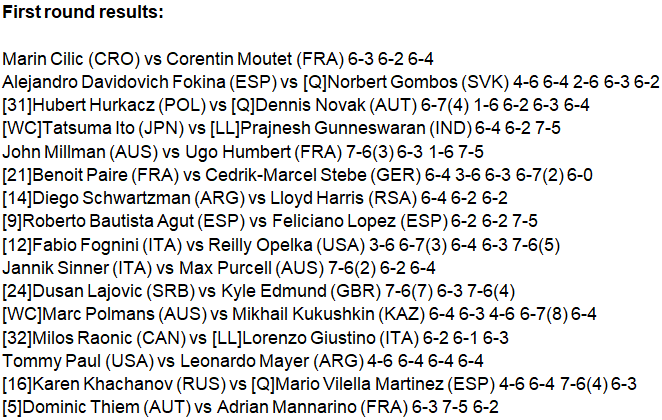 TODAY'S MOST POPULAR
In Roger Federer's words: 'It was something special for me to face Pete Sampras'
THIS WEEK MOST POPULAR
BREAKING NEWS: Roger Federer announces retirement from tennis
Powered by: World(D) 1.6