Former finalist and the 2nd seed Milos Raonic is safely through to the second round in Delray Beach, beating a lucky loser Denis Istomin 6-2, 6-2 in 65 minutes. Milos lost 13 points in eight service games, fending off both break points he faced and stealing Denis's serve four times from ten chances to control the scoreboard all the time.

The Canadian had to dig deep in the fourth game of the encounter, repelling those two break chances and earning breaks in games five and seven to claim the opener 6-2. With the momentum on his side, Milos broke his opponent in the first and fifth games of the second set to march over the finish line with a hold at 15 at 5-2.

Former top-10 player Jack Sock earned another wild card and ended his terrible streak with a 3-6, 6-3, 7-6 triumph over the defending champion Radu Albot in two hours and 15 minutes, saving a match point at 5-6 in the decider.

Jack played well in set number two before falling 4-2 down in the final set, pulling the break back straight away and fending off a match point in the 12th game to reach a tie break that he won 7-2 for an emotional moment and tears in his eyes, waiting for long for this moment to come.

The 4th seed Reilly Opelka prevailed against a qualifier Ernests Gulbis 6-7, 6-4, 7-6 in two hours and 39 minutes, firing 20 aces and facing only one break point in the entire match. Gulbis couldn't convert it but he fought well to stay neck and neck with the better-ranked opponent until the deciding tie break that Reilly claimed 7-4 with two mini-breaks that propelled him over the top.

A qualifier Cameron Norrie ousted the 3rd seed Taylor Fritz 6-4, 6-7 6-4 in two hours and 12 minutes, beating the American for the second time in four encounters. The Briton fended off five out of six break chances and Taylor couldn't follow those numbers, suffering three breaks to hit the exit door and push Cameron into the last 16.

After nine great holds in the opener, the Briton grabbed a break in the tenth game to take it 6-4, missing a chance to seal the deal in the second set tie break as Fritz stayed in touch to force a decider. There, the American squandered a break chance in the second game and gave serve away to send Cameron 2-1 up.

That was the only chance the Briton needed to finish the job, producing four powerful holds to secure the fourth victory of the season. Instead of Nick Kyrgios, Tommy Paul faced a lucky loser Daniel Elahi Galan and scored a 6-2, 6-4 triumph in 70 minutes, dropping only 12 points in nine service games and stealing the opponent's serve thrice for an easy day at the office.

Jordan Thompson stayed on the court for only 27 minutes, retiring after the opening set against Miomir Kecmanovic while trailing 6-2. 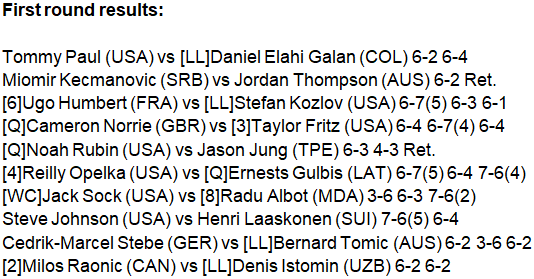