The 3rd seed and last year's US Open finalist Daniil Medvedev is through to the second round in New York, beating Federico Delbonis 6-1, 6-2, 6-4 in an hour and 46 minutes. The Russian controlled the scoreboard from start to finish, dropping 13 points behind the initial shot and fending off both break chances to mount the pressure on the other side of the net.

Stealing 46% of the return points, Daniil was always in charge, delivering five breaks from nine opportunities and sealing the deal in style to reach the second round. The Russian was off to a perfect start, rattling off one impressive hold after another and earning breaks in games two and four to take the opener 6-1.

Daniil saved those two break points in the second game of the second set, clinching two early breaks for a 6-2 and a massive step towards the finish line. The third set saw better tennis from the Argentine who was there to fight, producing four comfortable service games and suffering a single break at 2-2 that was enough for the Russian to cross the finish line with a hold in game ten.

The 14th seed Grigor Dimitrov ousted Tommy Paul 6-4, 6-3, 6-1 in an hour and 51 minutes, hoping to repeat the semi-final run from a year ago. The American wasted all seven break chances, suffering five breaks from Dimitrov's 12 chances to end his journey in the first round.

Grigor kicked off the encounter with a break, saving six break points in games four and six to remain in front. Paul erased three set points at 3-5 before Dimitrov closed the opener with a hold at 15 in game ten. The Bulgarian had the upper hand on both serve and return in set number two, losing three points on serve and delivering breaks in games one and nine to move closer to the finish line.

Grigor clinched a double break in set number three, moving over the top and setting the clash against Marton Fucsovics. The 6th seed and another semi-finalist from 2019, Matteo Berrettini, took down Go Soeda 7-6, 6-1, 6-4 in two hours and one minute.

The Italian blasted 18 aces and saved all four break chances, stealing the opponent's serve thrice to seal the deal in straight sets. Matteo had to dig deep in the second game, repelling those four break chances and never experiencing troubles in his games again.

He won the last three points of the tie break for a 7-5, gathering momentum and storming over Soeda to secure the second set in 25 minutes. The Japanese gave his best in the third set, leading 4-3 before Matteo shifted into a higher gear to grab 12 of the last 13 points and race towards the finish line.

The Cincinnati finalist Milos Roanic defeated Leonardo Mayer 6-3, 6-2, 6-3 in an hour and 49 minutes, dropping 13 points behind the initial shot and never facing a break point. Dominating on the return, Milos seized five breaks from nine chances, doing everything right on the court and continuing where he left a week ago. 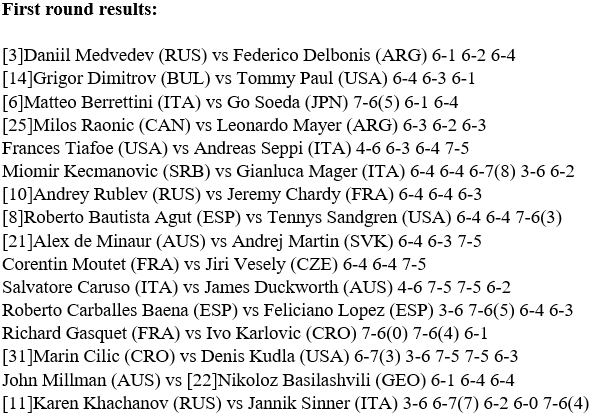