The defending St. Petersburg champion and the top seed Daniil Medvedev is through to the second round at home ATP 500 event. World no. 6 claimed the 16th victory of the season, beating Richard Gasquet 3-6, 6-3, 6-0 in an hour and 37 minutes.

The Russian blasted 22 aces and lost serve once in the first set, bouncing back and dominating sets two and three to race over the finish line. Richard won that opening set but that wasn't enough to keep him safe, taking only eight points on the return in sets two and three and suffering four breaks to send the better-ranked opponent through.

The returners won eight points in the opening seven games before Daniil netted a backhand to suffer a break and pushed Gasquet 5-3 in front. From 30-0 down in game nine, Richard grabbed four straight points to close the opener in style.

Medvedev had the upper hand in set number two, serving well and earning a break in game four to open a 3-1 gap. Gasquet saved two set points in the eighth game before Medvedev wrapped up the set with a hold at 15 to send the clash into a decider.

The Russian was the only player on the court there, earning three breaks and serving a bagel with an ace at 5-0 for a winning start. The 5th seed Stan Wawrinka took down Evgeny Donskoy 6-1, 3-6, 6-3 in an hour and 42 minutes to book the quarter-final spot.

The Swiss fended off five out of six break points, losing the second set but controlling the other two's pace to march over the top. Stan claimed the opener with breaks in games four and six, losing ground for a bit at 3-3 in set number two and bouncing back in the decider, serving well and delivering a break in game four that pushed him over the finish line.

Reilly Opelka had to work hard against a qualifier Nino Serdarusic, winning seven points more than the Croat in 3-6, 7-6, 6-2 triumph.

Daniil Medvedev and Denis Shapovalov made a strong start in St. Petersburg.

Serving at 77%, Reilly fired 26 aces and lost 11 points behind the initial shot, suffering one break in the opening set and prevailing in a tight set number two that saw only one mini-break!

Serdarusic had nothing more left in the tank, getting broken twice in the decider to propel the American over the finish line. Competing in only the second ATP match in a career, Roman Safiullin took down Emilio Gomez 6-4, 6-2 in an hour and 15 minutes following a rock-solid performance on both serve and return.

The 2nd seed Denis Shapovalov stormed over Viktor Troicki, beating the Serb 6-2, 6-3 in 62 minutes for a winning start. World no. 12 never faced a break point, seizing all four chances on the return to control the scoreboard and enjoy a relaxed day at the office. 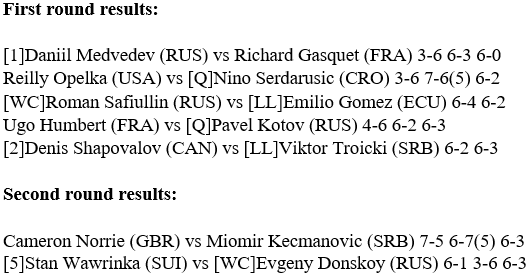