World no. 20 Stan Wawrinka earned the 153rd Masters 1000 victory in the first round in Paris, beating Daniel Evans 6-3, 7-6 in an hour and 33 minutes. It was the fifth win for Stan over Daniel from as many encounters, fending off both break chances and delivering one break in the opening set before prevailing in the second tie break.

The Swiss had 35 winners and 34 unforced errors, creating an advantage in the shortest and more extended rallies to seal the deal in straight sets. Stan held at 15 in the first game with a service winner, followed by an unreturned serve from Daniel, who got his name on the scoreboard in game two.

Wawrinka saved two break points at 1-1 with brave hitting, gathering momentum and earning a break in game four after a volley winner at the net. An ace propelled the Swiss 4-1 ahead, wasting two more break points in game six and a set point at 5-2.

Evans gave his best to grab those service games and prolong the set before Wawrinka sealed the opener with an ace down the T line in game nine after 37 minutes.

There were no break chances in set number two, with both players producing one powerful hold after another to reach a tie break, a must-win one for the Briton.

Stan won all five points on serve and grabbed two mini-breaks, moving over the top with a service winner at 6-3 to book the place in the second round. The 9th seed Pablo Carreno Busta ousted Jan-Lennard Struff 7-6, 6-2 in an hour and 19 minutes, dropping only 12 points on serve and keeping the initial shot intact.

The German stayed in touch in the opener before the Spaniard grabbed the tie break and momentum ahead of set number two. Carreno Busta saved a break point at 1-1 in the first set, which was the only chance for the returners ahead of the tie break.

The better-ranked player scored three mini-breaks and clinched it 7-3, gathering a boost and producing two breaks in set number two to advance into the last 16. A qualifier Norbert Gombos defeated the struggling Belgian David Goffin 6-4, 7-6 in an hour and 36 minutes.

The Slovak scored breaks in games eight and ten of the opener to move in front, with Goffin forging a 4-2 advantage in set number two. Norbert pulled the break back in game eight and bounced back from 6-3 down in the tie break, rattling off five straight points to seal the deal and send the 8th seed packing.

Marin Cilic didn't have to play his second-round encounter against Corentin Moutet, with the Frenchman testing positive for the coronavirus and leaving the event. 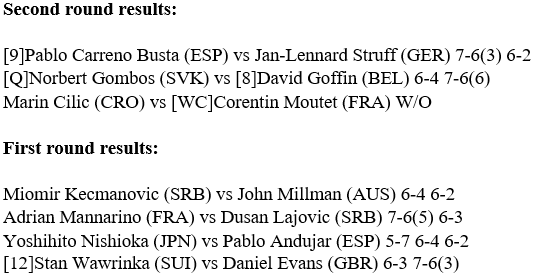