The 3rd seed Petra Kvitova is safely through to the third round at Miami Open, ousting Maria Sakkari 6-1, 6-4 in 69 minutes. The Czech delivered some impressive numbers behind the initial shot, dropping 16 points in nine service games and getting broken once from three chances she offered to the Greek who couldn't match those numbers in her games.

Maria lost half of the points in her games and Kvitova broke her four times to march towards the finish line and enter the last 32. Petra had to save two break points in the very first game of the match, stealing Sakkari's serve in the following game and opening a 5-1 lead when the Greek hit a double fault in game six.

The Czech needed just 25 minutes to wrap up the opening set with a service winner before losing the focus a little bit at the start of the second, falling 2-0 down when she netted a forehand. Maria stayed ahead only for a couple of minutes, though, suffering a break in the very next game and allowing Kvitova to break her again at 2-2 and grab four straight games.

Serving to stay in the encounter at 3-5, Sakkari repelled the match point with a forehand drive-volley winner although that was all she could do, with Kvitova sealing the deal with a service winner in game ten for the encouraging start of the campaign.

The 26th seed Donna Vekic clinched a 6-3, 6-3 win over Sara Sorribes Tormo in an hour and 24 minutes, losing serve twice and ruling in the return games to rattle off four straight breaks, taking the last three games from a 3-3 to book the place in round three.

Caroline Garcia toppled a former world no. 1 Victoria Azarenka 6-3, 6-4 in an hour and 36 minutes for the second win over the Belarusian in as many matches. Both players had their chances and it was the French girl who seized them more efficiently, saving seven out of ten break points she played against and taking five return games to wrap up the win in straight sets.

Caroline hit the zone right from the start, overpowering Azarenka to race into a 5-0 lead and converting the fourth set point at 5-3 to gain the momentum and confidence. We saw four straight breaks in the second set and it was Garcia who controlled the scoreboard with a break she scored earlier, holding at 15 at 5-4 to cement the triumph and stay in the competition.

The 15th seed Julia Goerges defeated Magdalena Rybarikova 6-4, 7-5 while the 12th seed Ashleigh Barty had an easy day at the office, needing just 63 minutes to dismiss the young Ukrainian Dayana Yastremska 6-4, 6-1. A teenager managed to score two breaks although that wasn't enough for a more favorable result, struggling big time to find the rhythm on serve and not being able to impose her shots against the opponent who was on every ball and who always forced her to play an extra shot.

The 7th seed Kiki Bertens required 69 minutes to topple the young Chinese Xiyu Wang 6-4, 6-1, losing only 12 points on serve to keep her games intact and claiming four breaks to control the pace and book the place in the last 32.

Johanna Konta has been in great form so far in Miami, upending Jessica Pegula 6-1, 6-4 in 67 minutes after a rock-solid performance on both serve and return to set the second round meeting with the 18th seed Qiang Wang. 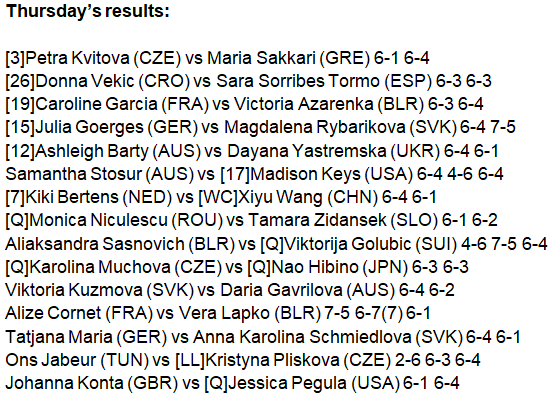