The 2nd seed Simona Halep has made a rock-solid start at Hard Rock Stadium in Miami, defeating a qualifier Taylor Townsend 6-1, 6-3 in 62 minutes for the third win in as many matches against the American. The Romanian served at 76% and that gave her the comfort to struggle a little bit on the second serve, saving four out of five break points to mount the pressure on Townsend who couldn't deal with it, losing 55% of the points behind the initial shot and suffering five breaks from nine chances offered to Simona.

The favorite settled into a nice rhythm right from the start, breaking Taylor three times in the opener for a 6-1 and sealing the deal with a double break in set number two to move into the third round. The 4th seed and the defending champion Sloane Stephens needed 70 minutes to dismiss Ons Jabeur 6-2, 6-3 for only the sixth win of what has been the mediocre season so far.

Jabeur won their previous match in Moscow last year but stood no chance in this one, earning two breaks but dropping more than half of the points behind the initial shot to trail all the time. Sloane delivered the opening set with three breaks under her belt and grabbed six of the last seven games, wrapping up the win with a hold at love at 5-3.

The struggling Russian Daria Kasatkina took down the 15-year-old Cori Gauff 6-3, 6-2 in 66 minutes, taking more than 60% of the points against a tired youngster to march into the third round. Gauff battled past Catherine McNally in the first round to become the fifth-youngest winner of the WTA match in Miami although she stood no chance today, losing serve three times in each set to push Daria over the finish line in just over an hour.

The 5th seed Karolina Pliskova ousted Petra Martic 6-3, 6-4 in an hour and 17 minutes, losing serve once and holding the strings of the match firmly in her hands with three breaks from ten opportunities, missing a chance for a more commanding win but certainly doing enough to sail into the last 32.

After winning the title at Indian Wells and that marathon first-round match here in Miami, Bianca Andreescu toppled the 32nd seed Sofia Kenin 6-3, 6-3 in an hour and 32 minutes, having the upper hand on the return all the time and using the fact Kenin served at only 42%!

The American had to play against 13 break points, giving serve away six times and scoring just three breaks which weren't enough for a more favorable result. In one of the biggest surprises so far in Miami, the 6th seed Elina Svitolina fell to Yafan Wang 6-2, 6-4 in only 82 minutes, never finding the rhythm on serve and suffering five breaks from 13 opportunities given to the Chinese.

Wang did almost everything right and she stayed on a high level throughout the encounter to bring it home in style and advance into the last 32. 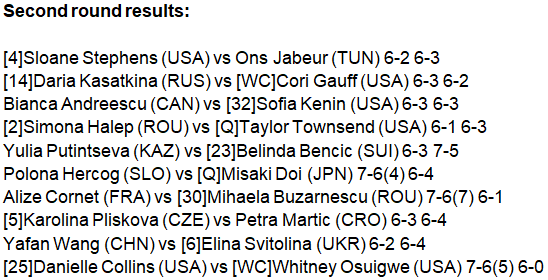