An in-form Swiss Belinda Bencic played on a very high level in Dubai and Indian Wells, coming on the verge of entering the top-20 and heading to Charleston as one of the main favorites for the title. The 9th seed kicked off the fourth Volvo Car Open campaign with a commanding 6-3 6-0 triumph over a qualifier Destanee Aiava in just 55 minutes.

The young Aussie stood no chance against the better-ranked opponent, dropping 60% of the points behind the initial shot and suffering six breaks from nine opportunities she offered to Belinda. On the other hand, Bencic gave away just 11 points in eight service games and controlled the scoreboard all the time after getting broken only once.

Trailing 5-1, Aiava saved a set point and broke Belinda to reduce the deficit to 5-3 before playing another poor service game and push the Swiss 6-3 up. Bencic was the only player on the court in set number two, dominating with her serve and groundstrokes from the baseline to rattle off seven straight games and seal the deal in less than an hour.

The 10th seed Jelena Ostapenko took down Johanna Larsson 6-1, 6-4 in an hour and 13 minutes, scoring the third win over the Swede in as many matches. The Latvian hit seven double faults although she was pretty much safe in her games, saving two out of three break points and mounting the pressure on her rival, taking 50% of the points on the return and earning four breaks from nine chances.

Larsson broke in the opening game of the match and that was all we saw from her in the first part of the encounter, dropping the next six games to propel Jelena into a big lead. Larsson fended off a break point in the first and fifth games of the second set, staying in touch until 4-4 when Ostapenko grabbed a crucial break, wrapping up the win with three straight games for the place in the second round.

The 13th seed Sofia Kenin has been on fire so far in 2019 and she is off to a good start in Charleston as well, toppling 2009 winner Sabine Lisicki 7-5, 6-4 in an hour and 25 minutes. Barely ranked inside the top-300 after numerous injuries, Lisicki is determined to make a comeback and she fought well in this one, suffering four breaks from as many chances offered to Kenin and breaking the American twice, which wasn't enough for at least a set.

Sabine led 5-3 and had a set point in the tenth game, wasting it and losing four straight games to hand the opener to the youngster. The second set was also tight and Sofia clinched it with two breaks, crossing the finish line first for the 15th triumph in 2019 so far.

Playing for the first time in more than a year, Shelby Rogers made an emotional comeback with a 6-4, 6-2 victory against Evgeniya Rodina in 69 minutes, dominating on the return to notch six breaks and advance into the second round.

Monica Puig needed just 56 minutes to dismiss Sara Errani 6-0 6-1, saving all six break points and delivering six breaks for a one-sided scoreline and one of the best wins in recent months. The 14th seed Ajla Tomljanovic toppled Magda Linette 6-2, 7-6 in just under two hours, trailing 4-1 and 6-5 in set number two but reaching the tie break somehow where she converted the third match point at 8-7 for a winning start.

Sara Sorribes Tormo proved to be too strong for Fanny Stollar, claiming a 6-0, 6-3 win in 65 minutes, playing against only one break point and taming rival's serve completely for six breaks that propelled her over the top. 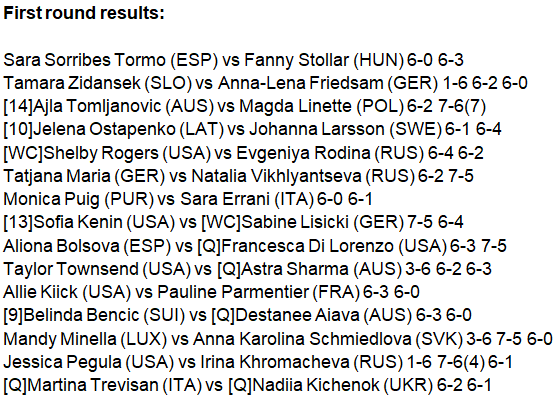 TODAY'S MOST POPULAR
TENNIS INTERVIEWS
Maria Sakkari reacts to ousting No. 1 seed Iga Swiatek in Ostrava
Felix Auger-Aliassime reacts to tight Matteo Berrettini loss at Laver Cup
Roddick: "I'm jealous of Roger Federer, but only for..."
Matteo Berrettini: I don't know how I came back to win against Felix Auger-Aliassime
Gael Monfils: I want to win Sofia
Nick Kyrgios: Boston Celtics players watching will bring added pressure at Laver Cup
Bollettieri on what Emma Raducanu and Roger Federern have in common
THIS WEEK MOST POPULAR
TENNIS INTERVIEWS
Jeremy Chardy: I regret getting vaccinated, I have series of problems now
Rafael Nadal: 'I am following the news and suffering with...'
Sharapova: "Serena Williams hated me for..."
Rafael Nadal showed his NEW AMAZING LOOK!
Maria Sakkari reacts to ousting No. 1 seed Iga Swiatek in Ostrava
Nick Bollettieri: Maria Sharapova was distinct from very young age
'Novak Djokovic was in a dilemma whether to play...', says top analyst