The 6th seed Kirsten Flipkens is off to a flying start in Monterrey, toppling Olga Danilovic 6-2, 6-1 in 59 minutes for a much-needed win after mediocre results in the first three months of the new season. The experience had the upper hand over the youth all the time in this one, with Flipkens losing just 13 points in eight service games, never facing a break point.

On the other hand, it was another poor performance from Danilovic who never found a rhythm on serve or return, dropping more than half of the points behind the initial shot and suffering four breaks from eight chances she offered to Kirsten.

The Belgian secured four straight games in the opener for a 6-2 and was even more impressive in set number two, taking all the games from 1-1 to wrap up the triumph in under an hour and book the place in the second round.

One young Serb couldn't make a winning start but the other took care for that, with Ivana Jorovic defeating Timea Babos 2-6, 6-4, 6-3 in an hour and 53 minutes. Thanks to that opening set, Babis won one point more than her opponent although that wasn't enough to cross the finish line first, creating 11 break points and converting five.

Jorovic had to work hard after the first set and she managed to hit the right zone, delivering five breaks from seven chances to turn the course of the match towards her side of the court. Losing just two points on serve in set number one, Babos was the dominant figure on the court and won it 6-2 with breaks in games one and five, hoping for more of the same in the rest of the encounter.

They traded four breaks in the middle of the second set and this time it was Jorovic who kept her focus, earning a crucial break at 5-4 to close the set and provide a decider where she found herself 2-1 down. Hardly seeing an obstacle in that, Ivana rattled off five of the last six games to march towards the finish line and round two.

The 8th seed Magdalena Rybarikova had to dig deep to oust Misaki Doi, prevailing 2-6 7-6, 6-4 in two hours and 20 minutes after being a 6-2, 3-0 down and two points away from the defeat in the second set tie break. Misaki played against just six break points and had numerous chances on the return, converting only four out of 13 break points which cost her dearly in the end.

The Japanese brought the opener home with breaks in games six and eight and was racing towards the finish line with a break at the start of the second set that pushed her 3-0 up. Rybarikova pulled the break back in the fifth game and saved a couple of break points in the following game to stay on the positive side of the scoreboard, entering a tie break that she won 7-5 to set up a decider, with the momentum on her side.

The Slovakian opened a 5-2 lead in set number two before Doi made one last push to break back in the ninth game and reduce the deficit, only to play a loose service game that pushed Magdalena over the finish line. Stefanie Voegele defeated Ana Bogdan 7-6, 6-2 in under an hour and a half, losing the advantage in the opening set twice before taking it in the tie break, controlling the scoreboard in the second set with two breaks for the winning start. 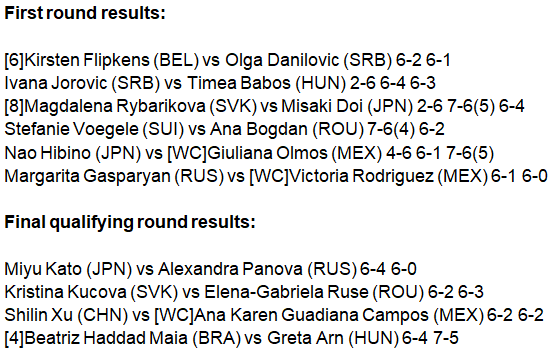