World no. 65 Rebecca Peterson is through to the second round in Istanbul, losing a set against the home player with a wild card Pemra Ozgen but prevailing 6-1, 2-6, 6-0 in an hour and 36 minutes. The Swede served just above the 50% and reduced the damage in her games after saving four out of seven break points, stealing more than half of the return points to create 14 chances and score six breaks that pushed her over the finish line.

Peterson won the opener 6-1 with a double break, losing the ground after that and allowing Ozgen to claim set number two 6-2 with three breaks under her belt, setting up the decider where the Swede restored the order to take it 6-0 in less than 30 minutes and move on.

The 6th seed Petra Martic stayed on the court for two hours and three minutes, coming from a set down to oust Tamara Zidansek 3-6, 6-1, 6-3 in their first meeting on the Tour. The Croat struggled to find the first serve and did her best to face only three break points, suffering three breaks and having to work hard on the return to erase that deficit.

That was precisely what she did, conquering half of the points behind Zidansek's initial shot to earn nine break chances and convert six, dominating in sets two and three to reach the last 16. They traded five consecutive breaks in the opener and Tamara claimed three of those to forge the lead and grab the set 6-3.

Martic lost just 17 points on serve by the end of the match, wrapping up set number two with a double break and having the edge in the decider as well to make the winning start. Margarita Gasparyan and Johanna Larsson stayed on the court for grueling three hours and ten minutes, with the Russian prevailing 7-6, 4-6, 6-3 despite taking one point less than the Swede.

There were 37 break points up for grabs and they both secured seven breaks of serve, three for Gasparyan in the deciding set that propelled her over the finish line. Larsson took charge early on, racing into a 5-0 lead and wasting four set points at 5-1, 6-5 and the tie break!

Gasparyan had to dig deep to overcome such a huge deficit, pulling breaks back in games seven and nine and fending off a couple of set points on serve at 5-6 to reach the tie break where she won three straight points from 6-5 down to steal the opener.

Larsson stayed focused, earning three breaks in the second set to stay in contention before Margarita scored three consecutive breaks at the beginning of the final set to jump in front and seal the deal with a hold in game nine. 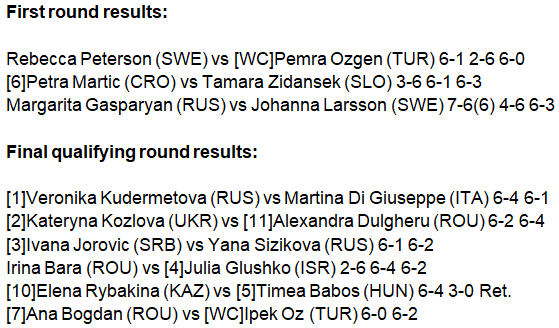