After a great first round win over Carla Suarez Navarro, Lara Arriabarrena has stayed on the title course with a 6-3, 6-2 triumph over Rebecca Peterson in an hour and 22 minutes. The Swede had her chances on the return but managed to convert only two out of ten break points, losing 54% of the points behind the initial shot and suffering six breaks that propelled Lara through.

The Spaniard controlled the pace in the opening set with three breaks of serve and grabbed the last five games from 1-2 in set number two to move over the top and advance into the quarters. Barbora Strycova ousted Sorana Cirstea 6-2, 1-6, 6-3 in two hours and 12 minutes in the match that offered 27 break points.

The Romanian did take five return games but it wasn't enough for the overall win, suffering six breaks and allowing Strycova to clinch the last three games at 3-3 in the decider and move into the next round. The 19-year-old qualifier Elena Rybakina dethroned Pauline Parmentier 6-0, 6-4 after a stellar performance that required 57 minutes to send her over the top.

To make things even worse, Parmentier served at 72% and that brought her pretty much nothing, getting broken five times from as many chances she offered to a teenager who stole almost 60% of the return points. On the other hand, Elena gave serve away only once and she was always in front, racing towards the opener in some 20 minutes and scoring a late break in set number two that propelled her over the finish line.

Margarita Gasparyan sent the 2nd seed Mihaela Buzarnescu packing, recovering her game after a slow start to celebrate a 1-6, 6-4, 7-5 win in just over two hours. The rising Czech Marketa Vondrousova toppled the 5th seed Ajla Tomljanovic 6-3, 6-3 in an hour and 24 minutes, getting broke thrice but creating no less than 16 opportunities on the return, seizing six to erase the deficit and move into the next round.

Three days after delivering the crucial doubles point with Caroline Garcia against Romania, Kristina Mladenovic is off to a winning start in Istanbul as well, taking out the 4th seed Dayana Yastremska 6-3, 6-4. Both players hit seven double faults and faced 12 break points, with Mladenovic creating the gap with her first serve that got her out of troubles many times, suffering four breaks and securing seven on the other side to leave the youngster behind and reach the last 16. 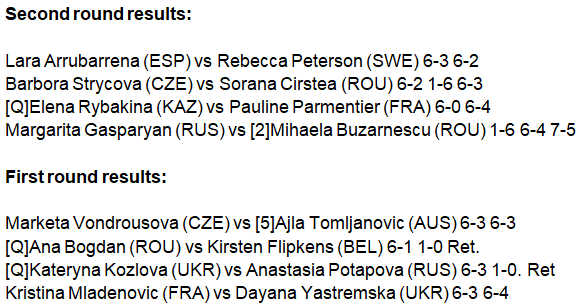